An attorney said the family has lost trust in local and state agencies in Akron, Ohio, to probe the police shooting.

On what would have been Jayland Walker’s 26th birthday had Akron, Ohio, police officers not shot him 46 times, an attorney representing his family requested that the U.S. Attorney’s Office investigate Walker’s death.

“I have spoken with (U.S. Ohio) Senator Sherrod Brown as recently as last night,” Bobby DiCello, the family’s lawyer, said Wednesday. “He is facilitating our dialogue with the Department of Justice. We have reached out to (U.S. Attorney General) Merrick Garland’s office directly. The mail should be arriving on his desk today.”

Eight police officers shot Walker 46 times after a brief car and foot chase last month. Walker failed to stop when police attempted to pull him over in the early hours of June 27, according to law enforcement. Minutes later, police allege, he fired a shot from his vehicle before exiting the car and running.

That’s when multiple officers unleashed a barrage of bullets that hit Walker in his arms, legs, abdomen and face, the Akron Beacon Journal reported.

Last week, Derrick Johnson, president of the NAACP, made the same request of Garland. Judi Hill, president of that civil rights organization’s Akron chapter, joined DiCello as he announced his plea to local media. She stood with DiCello and Walker’s family members outside the family’s church for a press conference at which DiCello expressed doubt about the integrity of the state’s investigating agencies.

DiCello said Clay Cozart, president of the Akron Fraternal Order of Police, spoke to local media last week and declined to provide “specifics of the shooting of my client, Jayland Walker.” DiCello cited Cozart’s statements as indicative of collusion between police, the state Attorney General’s Office, and the state Bureau of Criminal Investigation. 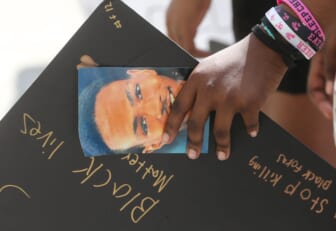 “He shouldn’t have any specifics,” DiCello said. “Last I checked, he was not involved in either the shooting or the operations of the city police department…We are going to drill down to figure out exactly how you became a witness. Who is talking to you? …How did you have the information that you gave to local media regarding this horrific shooting?”

The Akron Beacon Journal reported Cozart told its reporters that he talked to officers involved in the shooting before the Bureau of Criminal Investigation interviewed them. “I am allowed to talk to my members as I represent them,” he told the newspaper.

DiCello, however, says the family has lost trust in local agencies. “The Bureau of Criminal Investigation, the Attorney General’s Office was brought it to maintain some form of trust… You did not hear us initially ask for a different investigative body to get involved because we wanted to give that opportunity to the state to run this investigation. And we have given it that opportunity, and now we are calling for the Department of Justice to replace the Bureau of Criminal Investigation.”

In a statement emailed to theGrio, Steve Irwin, a spokesman for Ohio Attorney General Dave Yost, responded to DiCello’s remarks.

“BCI shall remain steadfast in our commitment to independent investigations regarding officer-involved shootings, and this case is no different. No updates have or will be provided to the FOP president or any other parties by BCI while the investigation is ongoing,” Irwin wrote. “The officers involved in the incident have a constitutional right to legal counsel like everyone else would in this situation. The family and the community deserve a thorough, independent investigation, and that is what they will get.”

The press conference served two purposes, DiCello said: to make his plea to Garland public and to allow the family to observe Walker’s birthday with the community from which it has received consistent support. After viewing a video of birthday wishes from family members, Walker’s tearful mother addressed the audience and recounted his birth and a childhood birthday party she threw for him.

“He struggled to come into this world because he was a twin that survived a miscarriage,” said Pam Walker, Jayland’s mother. “Unfortunately, he had to leave this world the same way, tragically.” 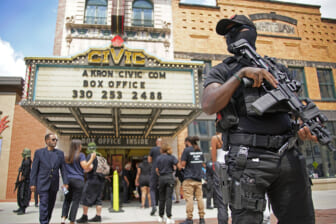 “I can only go on memories,” she said before tears covered her cheeks. “The only thing I can share with you guys is a memory of one of his birthday parties.”  The Walker matriarch said her son loved WWE wrestling and “Stone Cold” Steve Austin in particular. So she hired a look-alike actor to attend his party. And when the actor entered her backyard, Jayland and his friends “froze in their steps, and their eyes were this big. Their mouths dropped to the ground, and they couldn’t say anything,” she recalled. “That’s one of the best memories I have of Jayland on his birthday. That was a really great party.” As her mouth quivered and her voice cracked, she concluded the anecdote with “I  love you, Jayland,” as she sobbed heavily. “I  love you!”

Editor’s note: This story has been updated to reflect the location of the press conference as the Walker family’s place of worship.