Wilson Riles Jr., a former Oakland councilman who served the city from 1979 to 1992 and ran for mayor three times, has settled a federal lawsuit for $360,000 in which he claimed Oakland’s city staff and police officers racially discriminated against him and used excessive force when he was arrested three years ago.

The Mercury News reports that the incident occurred in 2019 at the city’s Planning and Zoning office over a dispute about a sweat lodge in Riles’ backyard that had become a point of contention among his neighbors. He used the sweat lodge in Native American ceremonies but had garnered complaints about the smoke and the lack of parking during events at his home.

Riles visited the office to address the issue, and during the meeting, employees called 911 and reported a “hostile individual.”

“I guess a black man is not supposed to raise his voice,” he told The East Bay Times then. “because me raising my voice caused them to call the police department.”

The report from that time said five officers arrived to detain Riles, and at one point, they grabbed him, tried to twist his arms behind his back and threw him to the floor. They also booked him on suspicion of battery and obstructing an officer. However, the Alameda County District Attorney’s office declined to file charges.

Riles, who maintains that the call to 911 was racially motivated, said he plans to use the money from the settlement to lobby for change in laws and codes in Oakland and to help improve police sensitivity. 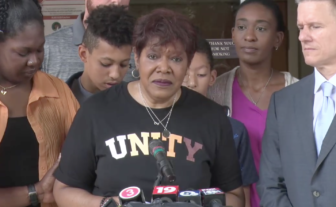 Also Read:
Jayland Walker’s family observes his birthday with a plea for feds to investigate his death

Regarding the award, he added, “I don’t believe that it’s justice. Because the city, in making the settlement, is not admitting that it’s wrong, or that its officers need to be retrained. So even though in some ways I get compensated for my injuries to my body and to my reputation, nothing will change in terms of the behavior of the Oakland police officers.”

The original complaint by his neighbors about the sweat lodge is still being fought in court. Riles is pushing back against having to pay for a series of tests on his fire pit.