Jan. 6 committee hearing revealed how Trump spent 187 minutes doing nothing to stop the riots at the U.S. Capitol

The president initially failed to listen to pleas from administration officials, friends and family, who asked him to intervene as his supporters attempted to stop Vice President Mike Pence from certifying the 2020 election.

The Jan. 6 House Select Committee held its eighth hearing Thursday night, and tears flowed inside the House chamber after riveting testimony was heard for almost three hours. The hearing focused on the 187 minutes that passed before then-President Donald Trump called on his followers to end their siege on the U.S. Capitol to stop then-Vice President Mike Pence from certifying the Electoral College vote.

Two former Trump officials who immediately resigned from their posts following the security breach at the U.S. Capitol supported the committee’s evidence, which included emails, video testimony and audio of Trump himself. The former Trump staffers were part of the administration’s National Security Council and communications office who provided testimony that the president was not in a rush to stop the riot after a chorus of people asked him to do something. 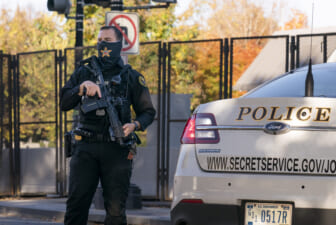 Testimony revealed that Fox News host Sean Hannity, White House Chief of Staff Mark Meadows, Fox host Laura Ingraham and others implored the president to tell the rioters to go home. Ultimately, 187 minutes later, Trump was given a script to read for a video to end the siege.

Thursday’s hearing also included testimony from a White House security official who revealed that several people on Pence’s Secret Service detail feared for their lives and began making calls over their radios to loved ones as protesters drew near.

“There was a lot of yelling,” said the official, who testified anonymously and whose voice was disguised. “A lot of very personal calls over the radio, so it was disturbing. I don’t like talking about it, but there were calls to say goodbye to family members, so on and so forth. It was getting—for whatever the reason was on the ground the V.P. detail thought that this was about to get very ugly.”

Texas Congressman Joaquin Castro attended the hearing and told theGrio that he painfully remembered being a part of the impeachment trial team that sought the conviction in the Senate after the second impeachment of Donald Trump. “I said, then what I think has been proven tonight, which is Donald Trump left everybody at the Capitol for dead that day,” the congressman said.

During the hearing, Washington Congresswoman Pramila Jayapal was seen crying as the committee presented videos of the deadly attack. Jayapal, who had attended three prior hearings, told theGrio the footage from Jan. 6 was a trigger.

“Particularly the hearings that as we will have today, that show footage from that day. That tends to be the trigger for me,” she said.

There were several levels of extremist trauma that affected the progressive congresswoman. “I’ve had this attack on my house by an armed individual with terrible threats. It feels even more of a trigger tonight because I don’t think that’s an isolated incident,” Jayapal said. “It’s not about a policy position. It’s about who I am. It’s about the violence that Donald Trump has helped to unleash to make it OK for people to spew racist, sexist, threatening, violent things at people, including with a gun at a congress member’s house. “

Thursday’s testimony also revealed that during those 187 minutes, the president tweeted twice and watched TV following the events of the day like the rest of the world, and he did not move to stop the deadly attack. There was also evidence presented that Trump told an employee that “Mike Pence let me down.” 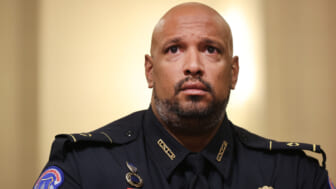 The committee meeting took place minus its chair, Congressman Bennie Thompson, who delivered a video message to the standing-room-only televised session because of an earlier COVID diagnosis. The gavel dropped and “the committee to be called to order” by Select Committee Vice Chair Liz Cheney, who was asked by Thompson to preside over the meeting.

In Thompson’s opening statement he said of Trump, “for 187 minutes this man could not be moved. He ignored the desperate pleas from his family and staff to stop the insurrection. The president posted two tweets during that time. He also kept his overcoat on for a while when he came back to the White House and went into the dining room.”

Thompson added, “There needs to be accountability under the law.”

Meanwhile, following the hearing, there was a bit of a melee when several Trump supporters, one wearing a flak jacket, harassed people as they left the Cannon Building.

There was only a handful of Capitol Police at the exit during this time while Trump supporters were questioning and intimidating people as they were trying to leave the area. The group of instigators then recognized the former Metropolitan D.C. Police Officer Michael Fanone, who was attacked on Jan. 6 during the riot. As he was walking to his car, they followed and harassed him. One of the antagonists claimed to be a citizen journalist who claimed to be with the Gateway Pundit who told theGrio Fanone was a ‘fake’ police officer.”

The ordeal came to a halt when a demonstrator carrying a sign was arrested after stepping between the group and Fanone to protect the officer. One person who appeared to be linked to the group was placed in an ambulance.

The Jan. 6 committee announced that it will spend the month of August working on information to present in the next hearing, which is slated to take place in September.