Superior Court Judge Ural Glanville heard a slew of motions in the case against Young Thug, whose real name is Jeffery Williams.

ATLANTA (AP) — A Georgia judge on Thursday denied bond — again — for Atlanta rapper Young Thug, one of nearly 30 people charged in a 65-count indictment alleging he is the leader of a criminal street gang.

Superior Court Judge Ural Glanville heard a slew of outstanding motions in the case against the musician, whose real name is Jeffery Williams. Rapper Gunna, whose legal name is Sergio Kitchens, is also charged in the racketeering and gang case. Both men have been in jail since their May arrests.

The musicians are accused of conspiring to violate Georgia’s criminal racketeering law, but the indictment outlines more serious crimes allegedly carried out by “Young Slime Life” associates ranging from drug possession to murder.

Of the 28 people charged, three remain at large, while at least eight who are in custody still don’t have attorneys, prosecutors told the judge, the Atlanta Journal-Constitution reported.

So far, Glanville has not granted bond to any of the defendants, citing concerns about witness intimidation and the possibility that additional felonies may be committed ahead of January’s trial. Williams’ attorneys have repeatedly asked that their client be given an ankle monitor and allowed to await trial on house arrest.

Appearing via video conferencing from the Cobb County jail, Williams smiled and blew kisses at relatives gathered in the courtroom during breaks in Thursday’s proceedings. 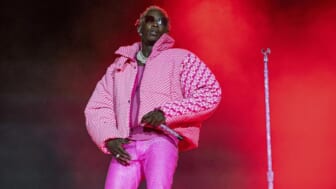 “Mr. Williams is an artist, a role model, a father and a son,” attorney Brian Steel told the judge, urging the rapper be released.

But his request was denied for the third time when Glanville sided with prosecutors to keep the musician behind bars.

The decision came after Glanville heard of at least one associate planning to testify against Williams being placed in protective custody after a document posted online showed his willingness to cooperate.

Fulton County prosecutor Don Geary asked the judge to further restrict the disclosure of certain evidence ahead of trial, saying a page from discovery that was recently shared online jeopardizes the witness’ safety. 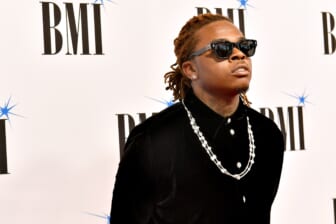 “We found a lot of information concerning one of our witnesses on basically a (celebrity news) outlet,” Geary told Glanville.

But Kristen Novay, one of Kitchens’ attorneys, asked prosecutors for proof that potential witnesses are actually being threatened.

“We want to know what specific threats there are,” Novay said. “There have been many allegations that there are threats to witnesses, and to date we have received no discovery, not a single shred of evidence from a witness who was actually threatened.”

In June, an 18-year-old relative of one of the defendants was arrested after allegedly threatening to kill the Fulton County sheriff and his wife unless Williams was released, authorities said, the newspaper reported.