U.S. Rep. Mondaire Jones (D-NY) has been defeated in a tumultuous primary election that will see the nation’s first openly gay Black congressman depart from Capitol Hill when his term ends in January 2023.

Jones and his other opponents in the race took aim at Goldman, accusing him of buying the congressional seat as he reportedly invested $4 million of his own money into the campaign. Goldman, a former prosecutor in former President Donald Trump’s first impeachment trial, also received an endorsement from the New York Times (despite also praising Jones), and shockingly, from Trump. 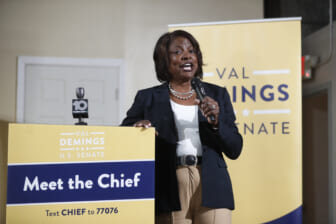 Congressman Jones’ race was undoubtedly the most competitive Democratic primary in the state, and arguably across the country.

The 35-year-old politician, who was endorsed by House Speaker Nancy Pelosi and Sen. Cory Booker, had a windy journey this election season, having first been challenged in his current 17th Congressional District by fellow Democrat Rep. Sean Patrick Maloney, following a court-ordered redrawing of the state congressional map.

Maloney, the chair of the Democratic Congressional Campaign Committee (DCCC)—which is tasked with the job of electing more Democrats in the House—was lambasted by Democrats, including Rep. Alexandria Ocasio-Cortez (AOC), for challenging Jones, a sitting Democrat in Congress.

Criticisms online also revealed outrage over the racial implications of a white man in leadership running to unseat the nation’s first openly gay Black congressman. Jones ultimately decided not to run for reelection in his district against Maloney. Another option was running against Bowman, a fellow progressive, in the 16th District, but ultimately, he decided to run for the reliably Democratic 10th District seat in New York City. On Tuesday, Rep. Maloney won the primary race to succeed Jones in the 17th District.

In an interview with theGrio ahead of Election Day, Rep. Jones said of the potential defeat, “to lose me in the House would be a blow to our democracy and the fight to protect fundamental rights,” adding, “I have been a leading progressive member of Congress, who has brought the rest of the Democratic caucus with him on issues like Supreme Court expansion, and voting rights and democracy reforms.”

Jones, who was once named the most active freshman in Congress, told theGrio that he was proud of his role in Congress as a “bridge builder” and negotiator between progressives, like him, and “conservative” Democrats. The congressman raised over $3 million throughout his campaign and spent considerably on TV ads in the city emphasizing his connection to the district’s historical LGBTQ+ roots, and his educational and professional rise despite being raised by a single mother while living on Section 8 housing and food stamps.

Jones was elected to the U.S. House of Representatives in the 2020 election, and quickly became a rising, young Black progressive voice in Congress. Along with Rep. Ritchie Torres, also of New York, Jones made history as the first openly gay Black man to serve in Congress.

After being sworn into office in 2021, Jones championed LGBTQ+ rights, introduced legislation to expand the Supreme Court over its conservative majority’s controversial rulings, advocated for stricter gun laws, student debt cancellation, immigration reform, and often called for the Senate to abolish the filibuster rule that has blocked crucial Democratic priorities like voting rights and police reform. 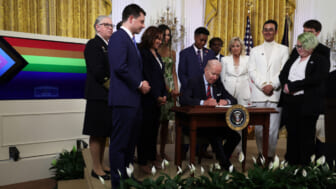 Jones told theGrio back in June how proud he was to serve as representation for Black and LGBTQ+ Americans, particularly young people. “I didn’t have images growing up of queer people and sort of respected in public life, whether on television or in politics,” he said. “And I certainly didn’t see queer people of color in those roles.”

Being that representation, he said, is “deeply transformative for people who are not yet courageous enough to live authentic lives.”

“Now I’ve gone on to inspire other people,” he added. “It’s really a joy.”