The new season of the popular reality show premieres on Oct. 9 on Bravo.

The ladies of Potomac are back and bringing the heat! Almost a year after the Season 6 finale aired on Bravo, “The Real Housewives of Potomac” is finally coming back to our screens. A new season trailer teases shifting dynamics, rumors and plenty of drama.

The Season 7 cast remains the same as last year: “OGs” Gizelle Bryant, Ashley Darby, Robyn Dixon, and Karen Huger, along with Candiace Dillard Bassett, Dr. Wendy Osefo and Mia Thornton. While no new housewives have been added, some old and new faces are spicing things up in a “Friend of” capacity, including original housewife, Charrisse Jackson-Jordan, who in the trailer seems to get into it with Huger. A friend of Mia’s, Jacqueline Blake, also joins the series.

Huger’s marriage to Ray Huger seems to be a major topic of conversation in the group. In one scene in the trailer, Huger says to her husband, “In our marriage you said that I could have eye candy. The clip then transitions to Dillard Bassett telling Darby in a different scene that the “Grande Dame” was “sneaking out of town with someone who wasn’t Ray.”

Another major bombshell seems to be coming from Darby and Bryant regarding Dillard Bassett’s husband Chris Bassett. Referring to him as a “sneaky link,” Bryant tells Dixon, “Many a married man have tried me and I felt like he was tryin’ to see if I was with it!” At the same time, Darby implies that Bassett has been sliding into her DMs, all while she also deals with troubles in her personal life.

In April, as theGrio previously reported, Darby announced her split from her husband Michael Darby after almost eight years of marriage. In the trailer, however, it seems the ladies this season are questioning exactly how “split” she is from her ex, as she reveals she is looking to buy a new house with him and their two sons, Dean and Dylan.

As for Dixon, she continues to inch her way toward making it down the aisle again with her fiancé and former husband, Juan Dixon. In the clip, the housewife is seen discussing the possibility of a prenup with Juan, which does not seem to go over well. 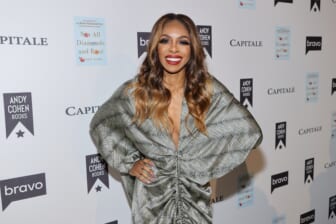 Dr. Wendy Osefo and Thornton also return this year, both dealing with intense medical and personal issues. While Osefo balances her many jobs and tries not to spread herself too thinly, Thornton implies she has cancer on social media, but her messaging is not the clearest, leaving the ladies to question the validity of her claims.

One of the biggest moments in the trailer comes from Osefo and Thornton, when the latter appears to throw an entire martini (yes, all of it) onto Dr. Wendy.

Check out the new trailer below:

“The Real Housewives of Potomac” returns at 8 p.m. ET on Oct. 9 on Bravo with a “super-sized” 75-minute premiere.