OPINION: Gauff's huge serve and fighting spirit assure fans that she's worth their emotional investment. Even in defeat, you know she fought to the end, and that makes you love rooting for her.

I will always love Serena. But as she evolves into the next phase of her life, the hearts of many Black tennis fans are shifting to the thrilling Coco Gauff, who seems poised to become a tennis superstar. She’s 18. She’s got a huge serve. She’s got her parents by her side as her coaches. She’s charismatic and telegenic, and she’s got the never-say-die spirit that we love so much in athletes.

It’s not unusual to see Gauff fall behind in a match and then mount a great comeback – proof of how much she believes in herself. It can be hard to maintain that self-belief when you’re getting beaten, and things aren’t working out.

As fans, we invest some of our heart and our spirit in the players and teams we root for. Even if they don’t win, we want to feel like they fought to the end so that our emotional investment is valued. Gauff is one of those athletes who, even in defeat, you can see that she was a fighter to the last moment so you love rooting for her.

Gauff’s got a huge serve that can sometimes top 120 mph, and she’s got a big forehand and she’s speedy around the court. She doesn’t play like a teenager. Her game seems mature. Her social media accounts reveal the depth of her commitment as she posts lots of videos of her grinding in the gym, lifting heavy things, running fast and hopping on one foot to build her strength and balance.

Yet, those same social accounts include posts of her lying on her bed in her room, doing an IG Live and showing us that she’s very much a regular teenager who loves Jaden and Willow Smith. She seems like a woman-child in that she has the physique and mentality to compete toe to toe with some of the best athletes in the world while thousands of people watch, but she’s also a sweet teenager.

On Tuesday night at the U.S. Open, there were a lot of Black folks in the crowd rooting for Gauff and hanging on her every shot. There were tennis fans such as Spike Lee, who’s been at the Open all week cheering on every prominent Black player, and the legendary singer Bobby Brown, who told me he knows nothing about tennis, but he watched Gauff closely and cheered for her throughout the match. 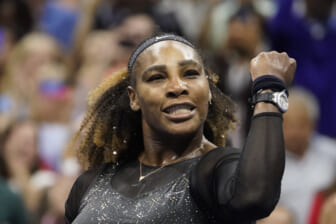 She played the very tough Caroline Garcia who was too much for Gauff on that night. Gauff’s 120 mph serves often came back even faster, which she found unnerving. But many people still sense that Gauff seems to be on the verge of a breakthrough to the highest level of tennis.

Gauff has said repeatedly that the Williams sisters are among her biggest inspirations, but as we move into the post-Serena era, increasingly there will be kids looking up to Gauff the way she came of age looking up to Serena. In the post-match press conference, I asked Gauff what her message was for Black kids who are looking up to her the way she did with her idol.

She said, “For kids who look like me I think continue to do what you want to do no matter what people say. I think for me, the Williams sisters definitely inspired me to play tennis because I saw someone who looks like me playing a sport with not a lot of people looking like me. So, I hope I can do that for other kids, and just continue to be your authentic self. Don’t feed into any stereotypes. Just be you.”