OPINION: The former first lady spoke truth to power and gave us an important reminder of what it really means to be American. 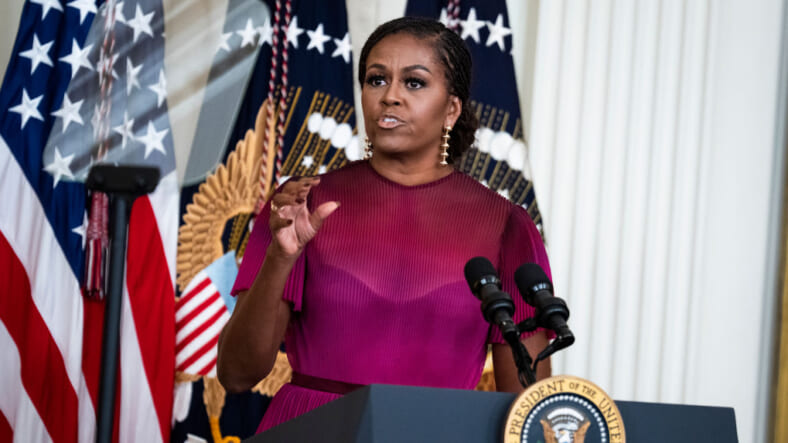 This past week, we witnessed living history. Not so much because of the Obamas’ long-awaited return to the White House for the unveiling of their official White House portraits, something that typically happens during the first term of a president’s successor.

The unveiling of the portraits was nice, and Michelle Obama’s painting was particularly compelling and very first lady-like. But I was inspired by two things that happened on Wednesday as she walked into the room: first, her freshly braided hair, which was pulled back in a bun. It made a powerful statement. And it gave us a glimpse of the Michelle we all love: free of the cares and confines of being the nation’s first Black first lady and free to be her authentic self.

Secondly, and most importantly, was what she had to say in her remarks about her journey, her husband’s journey and how it tells the story of the American journey. She said in part:

“I never could have imagined that any of this would be part of my story, but even if it’s all still a bit awkward for me, I do recognize why moments like these are important, why all of this is absolutely necessary. Traditions like this matter not just for those of us who hold these positions, but for everyone participating in and watching our democracy.”

The irony of this occasion is that it was being hosted by President Obama’s vice president, President Joe Biden, and his wife, Jill. This is not how these things have worked in the past. The White House portrait unveiling ceremonies are traditionally hosted by a president’s successor and have been used as an opportunity to celebrate the camaraderie of having the shared experience of being members of the world’s most exclusive club: president of the United States.

That didn’t happen for obvious reasons with the Obamas and the Trumps. We all know that Donald Trump started the birther lie about President Obama and demanded that he produce his birth certificate—or as my southern grandmother would say, “produce his papers.” And we know exactly how Michelle Obama feels about Trump as a result, as chronicled in her best-selling book, Becoming.

But that’s not what mattered about her remarks. This is simply the backdrop to the backstory of what we saw come to the forefront when Mrs. Obama spoke her truth—a truth many of us embrace:

“And too often in this country, people feel like they have to look a certain way or act a certain way to fit in, that they have to make a lot of money or come from a certain group or class or faith in order to matter. But what we’re looking at today—a portrait of a biracial kid with an unusual name—and the daughter of a water pump operator and a stay-at-home mom—what we are seeing is a reminder that there’s a place for everyone in this country.”

“Because as Barack said, if the two of us can end up on the walls of the most famous address in the world, then, again, it is so important for every young kid who is doubting themselves to believe that they can, too. That is what this country is about.  It’s not about blood or pedigree or wealth. It’s a place where everyone should have a fair shot, whether you’re a kid taking two buses and a train just to get to school; or a single mother who is working two jobs to put some food on the table; or an immigrant just arriving, getting your first apartment, forging a future for yourself in a place you dreamed of. That’s why, for me, this day isn’t about me or Barack.  It’s not even about these beautiful paintings. It’s about telling that fuller story—a story that includes every single American in every single corner of this country so that our kids and grandkids can see something more for themselves.

I, for one, am glad that Michelle Obama was our first Black first lady of this great nation. I was blessed to cover her for two years for this publication—to interview her, and get to know her. The elegance and grace she conveys, the unadulterated truth she speaks and the pride she makes us all feel when she enters a room are exactly the “feels” we all needed, as we gazed at her and her husband’s new portrait.