With her win, Ralph is the second Black woman to take home the award in the Outstanding Supporting Actress in a Comedy Series category.

“Abbott Elementary” continues its winning streak! Sheryl Lee Ralph took home an Emmy for Supporting Actress in a Comedy series at the “74th Emmy Awards” on Monday night, the first win for the series during the broadcast.

As theGrio previously reported, “Abbott Elementary,” from writer, producer and star Quinta Brunson, has been a smash hit for ABC, earning critical acclaim and breaking ratings records. With seven nominations, the series has been a favorite to win in many of the categories. The first one went to alum of television and stage, Sheryl Lee Ralph, for her performance as veteran teacher Barbara Howard at the fictional school.

Tearfully accepting the award, Ralph began her speech with a moving rendition of “Endangered Species,” by Dianne Reeves that had the entire crowd on its feet. The actress belted out, “I am an endangered species but I sing no victim’s song. I am a woman, I am an artist, and I know where my voice belongs.”

Continued Ralph, “Anyone who has ever, ever had a dream and thought your dream … couldn’t come true. I am here to tell you that this is what believing looks like. This is what striving looks like. And don’t you ever, ever give up on you.” She went on to specifically shout out Brunson, her husband and children in the speech. 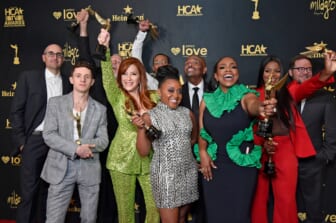 The speech immediately got the actress trending on Twitter where viewers called it one of the best Emmys speeches of the night and of all time. One user wrote, “Give Sheryl Lee Ralph a Tony for her Emmy acceptance speech, please and thank you.”

Ralph’s win is also a historic one at the Emmys, as she is only the second Black actress to ever win in the category. Thirty-five years ago, Jackée Harry won for her role of Sandra Clark on “227.” Harry herself celebrated Ralph’s win on Twitter, congratulating the fellow actress on her new trophy, while also disclosing that Ralph was actually supposed to play Sandra all those years ago.

Harry wrote, “The network originally wanted @thesherylralph to play Sandra on 227, but I got the part and won an Emmy for it. Now, Sheryl joins me as the 2nd black woman in this category and deservedly so!”