TOPEKA, Kan. (AP) — A former Kansas police detective accused of preying on Black women and girls for decades will be released from jail pending his trial on charges involving two accusers who say he repeatedly sexually abused them, a federal judge ruled Monday.

U.S Magistrate Judge Rachel Schwartz acknowledged the allegations against Roger Golubski represented “reprehensible conduct” and the underlying facts were “shocking,” but said he is not as much of risk as he would have been when the alleged crimes occurred. Prosecutors had also argued that he might try to flee, but Schwartz said his serious medical issues tie him to the community.

Golubski, 69, was arrested and charged Thursday on six counts of civil rights violations alleging that as an officer with the Kansas City, Kansas, police department, he sexually abused a Black woman and a teenager more than two decades ago. Five counts allege that Golubski kidnapped or tried to kidnap the victims.

Schwartz ordered Golubski to remain at home except for religious services and medical care, to be monitored around the clock, and to have no contact with possible victims or potential witnesses.

Prosecutors filed a motion Friday that included graphic details of his encounters with the two accusers and that added complaints from seven other females who say Golubski harassed and abused them.

Golubski has not been charged in those seven cases, but prosecutors argued they provided more evidence that he is dangerous and has shown “nothing but utter contempt for the law.”

Several women who say they or their relatives were victimized by Golubski attended Monday’s hearing.

Golubski, who retired in 2010, has pleaded not guilty. He faces a possible life sentence on each of the six counts. 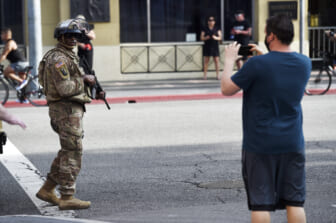 The case is being tried in federal court, rather than state court, because federal law does not have a statute of limitations for civil rights violations, former U.S. Attorney Stephen McAllister said.

Golubski’s attorney, Tom Lemon, said Golubski needs medical care for diabetes and to recover from quintuple bypass heart surgery. He also said it would be difficult to provide an adequate defense if Golubski remains jailed. The case requires “intensive” work because it appears prosecutors have no physical evidence, just victim statements, Lemon said.

“Now that he is sick and infirm, now the claim is that he is dangerous,” Lemon said. “I don’t see how he is a danger to anyone.”

“Mr.Golubski has terrorized a community for a long, long time,” Hunting said.

The motion filed Friday alleges Golubski displayed his gun while demanding sex and told the victims he would have them or their relatives imprisoned or killed if they ever told anyone what he did, prosecutors said.

The charges accuse Golubski of sexually assaulting a girl more than 10 times over about three years. He repeatedly told the girl, who was 13 when the abuse allegedly began, that he would kill her or her grandmother. He told her he would throw her in a river and sang a version of childhood song with the phrase, “where they won’t find her until she stank,” according to the motion.

The other victim in the charged case, Ophelia Williams, was raped and sexually assaulted several times over two or three years, according to the motion. He initially abused Williams shortly after her two sons were arrested, prosecutors said. 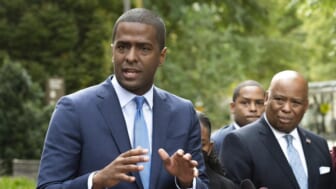 The Associated Press generally does not name alleged victims of sexual assault, but Williams has told her story publicly.

The seven other victims were abused or threatened by Golubski between 1980s and 2004, prosecutors said.

One woman said she called the Kansas City, Kansas, police internal affairs department to report her encounter with Golubski but was told “there was nothing they could do because it was (her) word against the defendant’s,” prosecutors wrote.

The police department said Monday that Chief Karl Oakman would not have any comment on the motion. Mayor Tyrone Garner has said he is committed to pushing for improvements in police-community relations to restore trust.

Another victim said Golubski sexually assaulted and raped her periodically between the mid-1990s and 2004 while threatening to take away her children, prosecutors said. In 2016, the woman was in the hospital when Golubski showed up and said, “Long time no see,” according to the indictment, prompting her to change hospitals, according to the motion.

Civil rights groups for years sought an investigation into Golubski. The allegations gained attention after Lamonte McIntyre, who spent 23 years in prison for a double murder he didn’t commit, sued Golubskiand other Kansas City, Kansas, officers. McIntyre and his mother, Rose McIntyre, alleged that Golubski framed Lamont in 1994 because she refused the detective’s sexual demands.

The local government agreed in June to settle the lawsuit for $12.5 million.