Drake fans will be able to win tickets to the exclusive show by scanning a QR code to listen to Sound 42 on the SMX App between now and Oct. 26.

Drake is coming to the Apollo Theater. The superstar rapper-singer announced that he will perform at the world-famous Harlem venue for the first time on Nov. 11.

He posted about the show on his Instagram page this week. The photo displayed in big font says: “Drake, Live From Apollo, November 11th,” with the theater’s New York address at the bottom.

The concert will be an exclusive event, presented by SiriusXM Radio. Drake fans will be able to win tickets by scanning a QR code to listen to Sound 42 on the SMX App between now and 11 p.m. ET on Oct. 26.

Founded by Drake and OVO co-founder Oliver El-Khatib, Sound 42, according to its website, is a 24-hour “radio experience reflecting his interests in music and culture from all walks of life.” It provides listeners with a mixture of “boundary-pushing hip hop and R&B” and international music from the U.K., the Caribbean, and elsewhere.

The forthcoming concert will be an intimate affair for Drake and concertgoers as the Apollo Theater’s capacity is just over 1,500 seats.

SiriusXM Radio has hosted numerous exclusive shows at the famed Harlem venue as part of its Small Stage Series. They have featured artists like Alicia Keys, H.E.R. and The Red Hot Chili Peppers. 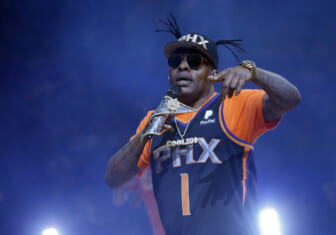 SiriusXM has also hosted many legendary pop and rock acts at the Apollo Theater for exclusive concerts over the years — icons such as Paul McCartney in 2010, Bruce Springsteen in 2012, and Metallica in 2013.

Drake released his latest album, “Honestly, Nevermind,” in June. It became his 11th No. 1 album on the Billboard 200 chart. He is one of five artists to achieve 10 or more No. 1 albums on that chart, a list that includes The Beatles, Jay-Z, Bruce Springsteen, and Barbra Streisand.