The 27-year-old “Body” singer took time to recount her lofty achievements, which includes earning a college degree in 2021 from Texas Southern University.

It was a “Hot Girl Saturday” Oct. 15 as rapper Megan Thee Stallion graced the “Saturday Night Live” stage as both host and musical guest performer.

Megan, a three-time Grammy winner, first debuted on the Studio 8H stage at 30 Rockefeller Plaza as a musical guest in 2020, but kicked off her hosting debut Saturday with a monologue full of the signature confidence and stage presence her fans know and love.

The 27-year-old “Body” singer took a moment to recount her lofty achievements as one of hip-hop brightest stars, which includes earning a college degree in 2021 from Texas Southern University.

“Finishing college while pursuing a rap career is not easy, and I did that while putting out song after song and going on a world tour,” Megan said. 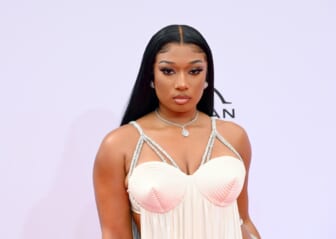 The artist goes by many names: “Tina Snow,” “The H-Town Hottie,” “The Hot Girl Coach” — but amid her whirlwind success and busy schedule, she told the SNL audience that she can now go by another name: “Megan, Thee B**** That Needs Some Sleep.”

Megan discussed her inspiration for pursuing a degree in health administration, explaining that she has always been motivated to help those in her community. She recently launched a website aiming to serve people of color and the LGBTQIA+ community with a myriad of mental health helplines and resources.

As previously reported by theGrio, the rapper in September announced her “Bad B****** Have Bad Days Too” site, which offers links to external websites and hotlines for mental health services and therapy organizations.

On Friday, Megan shared that she would need a break following her SNL appearance due to a home invasion robbery that occurred at her Los Angeles home on Thursday. As previously reported by theGrio, two men broke in through her back door window and stole up to $400,000 worth of jewelry from her bedroom.

She may have referenced the recent break-in during her monologue when she hinted at a “certain incident” that she was sure would be on everybody’s minds. She instead joked that she doesn’t know why Popeye’s removed her signature “Hottie Sauce” from the menu.

Among Megan’s standout sketch performances was the evening’s first sketch: “Hot Girl Hospital,” in which Megan stars alongside SNL’s Ego Nwodim and Punkie Johnson as nurses in a hospital dedicated to glamifying patients who are suffering from being too “basic.”

From her latest album “Traumazine,” Megan took to the stage to perform “Anxiety,” returning later to perform a mash-up of “NDA” and “Plan B.”