The new postage stamp designs roll out in 2023 and will feature several prominent individuals and trailblazers.

Authors Toni Morrison and Ernest J. Gaines are among the honorees who will receive a new stamp from the U.S. Postal Service, according to a news release.

Morrison is best known for her works, “The Bluest Eye,” “Song of Solomon” and “Beloved.” She made history in 1993 when she became the first African American woman to win the Nobel Prize for Literature. Her postal stamp is a photograph of the celebrated author taken in 2000. Art director Ethel Kessler designed the stamp and Deborah Feingold photographed it.

Gaines’ novel, “The Autobiography of Miss Jane Pittman,” garnered him both critical and popular acclaim in 1971. The late author, who holds honorary doctorates from 19 universities, according to his bio, is also known for the novel, “A Lesson Before Dying.”

His stamp was inspired by a 2001 photograph of Gaines and depicts an oil painting of the image that Mike Ryan designed. Robert Peterson created the art, USPS.com reported. 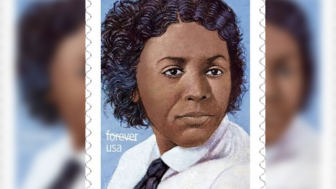 The USPS is also paying homage to U.S. women’s soccer with a stamp depicting a female soccer player in action.

“The 2023 stamp program features a broad range of subjects and designs. These miniature works of art highlight our unique American culture and offer a broad selection for those looking to collect stamps or send their mail around the nation or the world,” said USPS Stamp Services Director William Gicker, in the news release.

An announcement of more stamps is planned in the coming months. Images of all the new stamps are here. The preliminary designs are subject to change, according to the USPS.