Can we talk about Halloween?

For some, Halloween represents a night of nostalgia and freedom — but some Black people simply just don’t care for the holiday.

Pumpkin Spice everything. Turning leaves and earlier nights. Candy corn (which I do not recommend—ever). October marks the beginning of what many consider the holiday season, with Halloween kicking off a two-month marathon of holidays and festivities. For many, it’s the perfect holiday — there are no forced family interactions or hours of cooking, and you get to wear silly costumes, eat an abundance of candy, and participate in all things spooky.

Now, Halloween might have roots in Catholicism but if you grew up anything like me, you wouldn’t dare put Halloween in the same category as holidays like Christmas or Easter. As a child of two Caribbean parents who migrated to this country, certain “holidays” never made sense, especially Halloween. My father was indifferent to the holiday, but in my Christian Caribbean mother’s eyes, all the traditional eerie decorations and rhetoric associated with the holiday were demonic. So, Halloween was never a big deal. Fake spider webs or skeletons never adorned the trees and bushes outside my childhood home. Pumpkins rarely ever sat on the steps of our front porch — and if one ever did make its way there, it was by way of me bringing home a class project. In my house, the only spirit we acknowledged was the Holy Spirit. 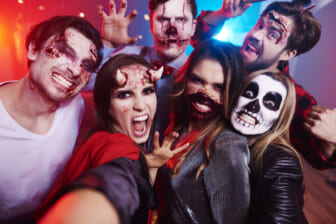 Also Read:
A list of 5 things I am begging white people not to do this Halloween season

This was (and is) a common theme in many religious and Black households, including those of evangelical Christians, Muslims, Jews, and Jehovah’s Witnesses. When I was growing up, those who were deeply devoted to their religions viewed the celebration of Halloween as a celebration of the devil. As a result, many church kids I knew weren’t allowed to partake in any spooky season activities.

Thankfully, my mother wasn’t like that. Although she did not play into what she called the “foolishness” of Halloween, she did not completely deprive me of it. I have her own childhood experience to thank; after immigrating to the United States as a pre-teen, my mother understood firsthand how mean kids could be when you didn’t follow their social norms. Though I never experienced the torment of being a Haitian kid in 1980s Brooklyn, I did know what it was like to be the token Black girl in a predominantly white and European school and neighborhood. So, every year until it wasn’t “cool” anymore, my mom allowed me to dress up to go trick-or-treating.

That said, there were a lot of limitations to my festivities, the main one being that I was not allowed to dress up as anything scary. So, in true girlie-girl fashion, I was a princess every year. From the age of 5 to approximately 12, I was a Black rendition of nearly every Disney princess. Another caveat to my participation was where I could trick-or-treat — my entire trick-or-treating career was spent at the mall. Every year on October 31st, I frolicked around the mall with my parents, stopping at every store and kiosk to say “trick-or-treat!”

Though spending Halloween night at the mall was admittedly beneficial to my candy collection, it stemmed from my parent’s skepticism of accepting things from other people’s homes. Considering the harm done to children on Halloween, I understand the precaution, but as a Haitian-American, I also know the cultural hesitance to accept things from people because you never know what spiritual energy or bad luck the object could be carrying — even if it’s just a pencil from a harmless classmate.

As a child, I might’ve rolled my eyes, but as I’ve gotten older, I’ve become more and more understanding as to why my mother sucked her teeth every time I mentioned anything ghoulish. Halloween, also known as “All Hallows Eve,” derives from the festival of Samhain, an ancient Celtic festival and pagan religious celebration marking the start of the harvest season. During the festival, followers believed the separation between the spirit world and the living would disappear, allowing the souls and spirits of the dead to return to earth. In an effort to protect the living world, the Celts would wear scary costumes to ward off the dead and burn offerings that attracted bats (believed to be harbingers of death), as well as practicing forms of witchcraft and divination. 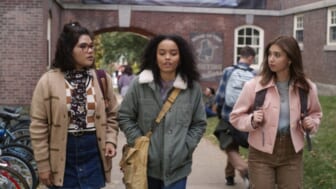 Also Read:
Four reasons why ‘Hocus Pocus 2’ is a must-watch flick this fall

One of those ancient symbols that live on today is the jack-o-lantern. The modern-day Halloween decoration is based on the legend of “Stingy Jack,” a man believed to have tricked Satan so much that he was not allowed into heaven or hell upon his death. According to the legend, Satan gave Stingy Jack’s ghost burning coal in a carved-out turnip to light his path as he roamed the earth in punishment. Eventually, Celts began carving scary faces into pumpkins instead of turnips in hopes of scaring away evil spirits.

Remember when I said the only spirit my Bible-believing mother acknowledged was the Holy Spirit? Given its history, it’s not surprising that most Catholics associate Halloween with the devil. However, it is surprising how many Black people adhere to that same belief, given that across the Caribbean and Africa, various practices, ceremonies, traditions, and even religions honor far more than just the Holy Spirit. It was the Middle Passage and the Christianization of enslaved people that demonized these centuries-old cultural beliefs, distancing many of us from our own spiritual communions with our ancestors.

All of these factors cause some Black people, like me, to have a complex relationship with October 31st. To this day, I can’t bring myself to dress up as a witch or anything scary for Halloween, and even when I join my friends in watching scary movies or going to haunted houses, I always picture my mother sucking her teeth disapprovingly, asking why I’m wasting my time and money participating in this “foolishness.” But the fact is, this “foolishness” symbolizes something different for everyone. For some, Halloween represents a night of nostalgia and freedom; for others, fear or even a healing of their inner child. So if Halloween triggers more tricks than treats for you, it’s OK. Under the costumes, it’s complicated.

Haniyah Philogene is a multimedia storyteller and Lifestyle reporter covering all things culture. With a passion for all things digital media, she goes above and beyond to find news ways to tell and share stories.