The highly anticipated sequel to the wonderfully witchy cult-classic film from 1993 premieres on Disney+ today.

The Sanderson sisters are back!

Just in time for spooky season, “Hocus Pocus 2” is dropping on Disney+ today, and theGrio got a first look at the highly anticipated sequel. From diverse additions to the main cast to electrifying musical numbers, here are four reasons why “Hocus Pocus 2” is the perfect flick for the whole family to stream as we dive into October.

Almost three decades ago, the original “Hocus Pocus” film, starring Bette Midler, Sarah Jessica Parker and Kathy Najimy as Winifred, Sarah and Mary Sanderson, premiered in movie theaters. Despite being a box-office disappointment that earned poor reviews from critics, the flick has since become a cult classic, with fans showering it with love every Halloween season for its scares, spooky vibes and campy performances from an undeniably talented lead cast.

“Hocus Pocus 2” returns to Salem 30 years later, reuniting the people of the town with the famed Sanderson sisters — with all three original actresses reprising their 1993 roles. The sight is a treat for fans, as the women resume their zingy one-liners, hilarious spell castings and endless singing.

One of the most exciting aspects of the sequel is the new trio of stars. Led by Whitney Peak, who also stars in the latest “Gossip Girl” reboot, “Hocus Pocus 2” adds some fresh diversity to the original’s all-white cast.

Peak’s Becca is joined by Belissa Escobedo as Izzy and Lilia Buckingham as Cassie, the film’s young protagonists being three who offer a more feminist spin this time around. Reinforcing the power of friendship, Izzy, Cassie and Becca are strong characters that young Disney+ viewers can look up to.

Fans of “Veep” on HBO and “The Afterparty” on Apple TV+ are in for a pleasant surprise with the sequel’s addition of Sam Richardson. Joining the cast as Gilbert, Salem’s magic shop owner, Richardson helps guide our new trio of leads with his knowledge of magic and all things Sanderson-sisters related.

It wouldn’t be “Hocus Pocus” without a fabulous musical number, and “Hocus Pocus 2” delivers that in spades. Fans may remember the original film’s “I Put a Spell on You” sequence, which featured Midler, Parker and Najimy casting a spell on the people of Salem while belting out the “Screamin’ Jay” Hawkins classic. 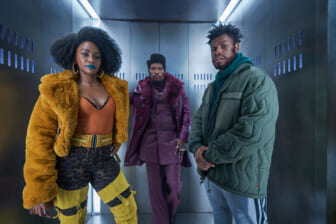 Fans have nothing to worry about when it comes to the quality-music department. With flashy choreo, memorable songs and the vocals viewers have come to know and love, “Hocus Pocus 2” will have the entire family dancing in their living room.

The film premieres today, available to stream exclusively on Disney+.