Slain rapper Takeoff to be remembered at Atlanta celebration

Takeoff, born Kirsnick Khari Ball, was killed Nov. 1 in a shooting outside a Houston bowling alley.

ATLANTA (AP) — Fans of the slain rapper Takeoff, a member of the hip-hop trio Migos who was shot and killed a week ago, will gather Friday to celebrate the 28-year-old’s life and musical contributions.

Born Kirsnick Khari Ball, Takeoff was killed Nov. 1 in a shooting outside a Houston bowling alley. A woman and another man were also wounded during the shooting. No arrests have been made.

A celebration will be held at noon Friday in Atlanta’s State Farm Arena, according to a news release from Quality Control Music and Motown Records. Free tickets will be available to Georgia residents through Ticketmaster.

“Takeoff was one of the most influential names in modern music whose creativity left a profound impact on music and culture as we know it today,” read the release. Instead of flowers or gifts, the family is asking that people make donations to The Rocket Foundation, which aims to support programs using community-based solutions to stop gun violence, according to its website. The website says the foundation was established in honor of Takeoff. 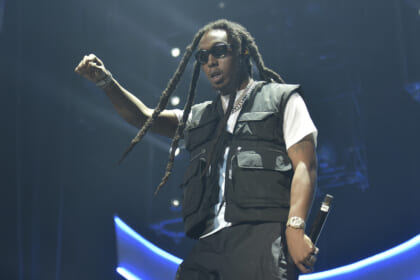 The 28-year-old Takeoff formed one-third of the Grammy Award-nominated trio Migos along with his uncle Quavo and cousin Offset from suburban Atlanta. Migos broke out nearly a decade ago with the 2013 hit “Versace,” which hit even greater heights in popularity though a Drake remix.

Takeoff was the youngest of the Migos trio and often considered to be its most laidback member. Despite being more reserved, he did a lot of his talking through his rhymes. He had hoped to gain more respect for his lyrical ability through “Only Built for Infinity Links,” an album he released with Quavo just last month.