Mandela Barnes loses bid for US Senate in Wisconsin

Barnes, the state’s current lieutenant governor, was vying to become the first Black person elected to the U.S. Senate in the state’s history.

Mandela Barnes has been defeated in his bid for the U.S. Senate seat in Wisconsin, according to polling results from the Associated Press. Barnes, the state’s current lieutenant governor, was vying to become the first Black person elected to the U.S. Senate in the state’s history.

The 35-year-old politician was hoping to continue his winning streak in the state after he made history in 2019 when he was elected as lieutenant governor, becoming only the second Black person elected to statewide office in Wisconsin’s history.

The Senate contest in Wisconsin was seen as one of the best opportunities for the Democratic Party to maintain or expand its majority in the upper chamber in Washington, D.C.

Throughout the election cycle, Barnes shaped his Senate campaign around his personal story as a son of Wisconsin, educated in public schools and raised by working-class, union-member parents — his mom, a Milwaukee school teacher, and his dad, a factory worker. Barnes’ grandfather moved to Milwaukee after World War II, then worked as a union steelworker.

During the hotly contested race for Senate, the Democratic nominee slammed his opponent, calling Johnson “out-of-touch, ultra-wealthy, pro-outsourcing [and] anti-union,” while Johnson accused Barnes of being soft on crime and supporting “massive spending” by Democrats that he said has caused inflation. Barnes and Johnson clashed in their second Senate debate in October over national issues like the economy, crime, abortion and immigration. 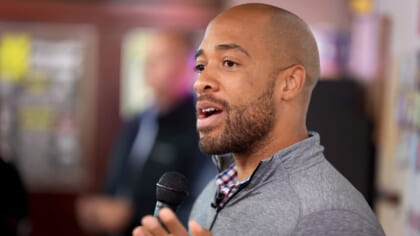 In a previous interview with theGrio, Barnes said part of the reason why he wanted to go to Congress was that “the Senate is broken.” He called it a “place that doesn’t share the experience that a majority of people in this country experience.”

“It’s the reason why we see legislation get stalled as soon as it hits the U.S. Senate — because most of our U.S. senators aren’t impacted by these issues,” Barnes maintained. “Most of the senators are so detached from the real world as a majority of people live it.”

Though Barnes trailed in polls leading up to Election Day, he remained optimistic that he could make history and bring change to Washington.

“I’m running because better is possible, and I believe we can give everybody in this state, in this country, a fair shot at the American dream,” he said. “But it takes people who actually share our experiences and people who share our values … people who want better for somebody other than themselves.”