The NYC mayor’s office did not specify how many migrants had used the facility.

New York City is closing a tent complex for migrants that it had just opened three weeks ago as the influx of people being bused from southern border states has slowed, officials said Thursday.

The temporary humanitarian relief facility at Randall’s Island is scheduled to shut next week, and any occupants will be offered space at a new relief center opening in a midtown Manhattan hotel, Mayor Eric Adams’ office announced.

“We continue to welcome asylum seekers arriving in New York City with compassion and care,” Adams said in a statement, adding that the new hotel center “will provide asylum seekers with a place to stay, access support, and get to their final destination.”

The center had opened Oct. 19 to house single men seeking asylum in the U.S. for temporary periods after their initial arrival in New York City. The center helped them determine what resources they needed and whether they wanted to go elsewhere.

In recent months, the number of migrants, mainly from Venezuela, arriving in New York City had sharply increased after officials in states like Texas and Arizona sent them over on buses. 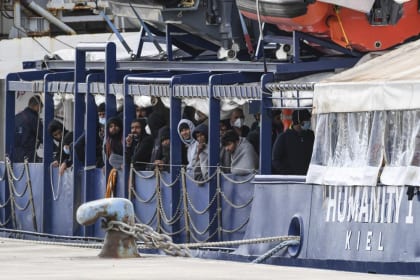 Also Read:
Ship refuses to leave Italy port until all migrants are off

It led to Adams declaring a state of emergency over the increased pressure on the city’s infrastructure, with the homeless shelter system bursting. There are more than 63,300 people in the shelter system.

But the Randall’s Island facility, made up of heated tents that included cots for up to 500 people and could have held double that number, didn’t use anywhere close to that capacity.

The mayor’s office did not specify how many migrants had used the facility. It said there 17,500 people seeking asylum in the city’s care overall.

Even before it opened, immigrant advocates had been concerned about the center over a range of issues including its location, on an island between the Bronx, Manhattan and Queens, and whether it was appropriate to house people in tents instead of built spaces like hotels, and whether migrants would be getting adequate services.

News of its shutdown was met with approval.

“The city is doing the right thing by moving people to a setting where they can have their own space and get settled so they can move on with their lives,” said Kathryn Kliff, an attorney with the Legal Aid Society. “Also, we are glad that this new location will be much more accessible to public transit so clients can access services and easily travel to and from the site.”