Yvette Nicole Brown on ‘Disenchanted,’ forming a ‘trio of foolishness’ with Maya Rudolph and Jayma Mays

The sequel to the popular 2007 film "Enchanted" is streaming now on Disney+.

Yvette Nicole Brown has joined the “Enchanted” family! That’s right, the actress appears in “Disenchanted,” the sequel to Disney’s 2007 live-action fairy tale, alongside Maya Rudolph, Amy Adams and others.

TheGrio caught up with the actress and broke down her excitement regarding the project, the “comedy troupe” she formed with Rudolph and Jayma Mays and the powerful themes in the film regarding happily ever after and the hurdles life throws at you.

“Disenchanted” takes place 10 years after the original film, long after Princess Giselle found her “happily ever after” in New York City with her “prince,” Robert Philip. With her stepdaughter growing up and many changes happening with her family, Giselle is confronted with life after the happy ending, something that Brown believes will resonate with viewers.

“I love that we’re delving into that, especially in Disney films, the whole race is to get to the “happily ever after,” Brown told theGrio. “What Giselle realizes is, ‘What is left? What if this isn’t everything that I thought it would be?’ I think we all have felt that. We have all raced toward something.”

Continued Brown, “There’s always something else that comes, even when you get a blessing, that you have to deal with. I love that we touch on that and that she finds her ‘happily ever after,’ even after her first. Life changes and it moves and it’s a living thing. It breathes and sometimes it’s great, sometimes it’s not great, but there’s always another day, another chance to try again and I think that’s something else that our film shows as well.” 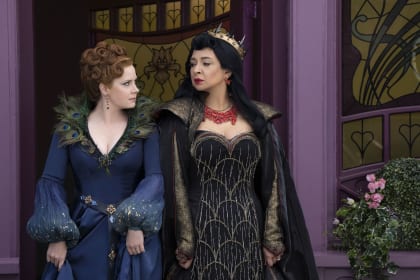 Also Read:
Maya Rudolph and Amy Adams on ‘Disenchanted,’ life after ‘happily ever after’ and more

Though “Disenchanted” has deep and moving themes, it is filled with a whole lot of fun — for Brown’s character, Rosaleen, in particular. Both Brown and Mays appear alongside Maya Rudolph’s Malvina Monroe, who takes on the Evil Queen role in the fairy tale.

“We were kind of like a comedy troupe, a little trio of foolishness,” Brown said. “I have like a time capsule in my mind of doing this film and working with all of these amazing people and my time with Jayma and Maya in particular is just really special to me.”

“Disenchanted” is currently streaming on Disney+.