Sweet and simple: the do’s and don’ts of making sweet potatoes

If sweet potatoes are a staple at your holiday table, no doubt you've got your own way of doing them — but are you doing too much, or not enough?

Years and years ago, my grandmother, the sage Southern cook of the family, said she wasn’t making sweet potato casserole for Thanksgiving.

I took that as a sign of the apocalypse. No Thanksgiving sweet potatoes? That’s like saying there’s no potato salad at the barbecue or no mac and cheese at Sunday supper.

As it turns out, that was my mama “joshin’ me” — which I found as funny as someone telling me they would take away my baseball cards. Not at all funny.

She made the sweet potatoes as they should be — simple and delicious. To this day, I don’t understand why people complicate and mess up an uncomplicated dish.

Messing up the casserole would make you the center of attention, but in that bad kind of way, like the “she forgot to wear her hat to church” way that is met with glares, smirks and whispers.

You do not want to be that person.  Stick to these tips, and you’ll be OK.

DO: USE AN EGG

Eggs make the sweet potato light and fluffy. Make sure the potatoes are completely cooled before adding the egg; otherwise, you’ll have scrambled eggs in your dish, and that will get you the dreaded furrowed brow from family members.

If you want to get a little fancy, instead of mixing whole eggs — most recipes call for two — use three or four egg whites, beat to stiff peaks, and gently fold into the mashed sweet potatoes. That’s my preferred method, as you’ll see below. This gives the casserole a lighter texture.

If I heard my mama say, “What on God’s green earth,” I knew I had done something wrong. Anytime I see someone bring sweet potatoes topped with marshmallows, that’s my reaction. Marshmallows are fine over an open fire for S’mores, but that’s about it. They are sticky and gooey and add too much sweetness to the dish.  By the way, Saveur magazine reports that the trend of placing marshmallows on sweet potatoes dates back to 1917, when the first known recipe appeared in a cookbook. According to Saveur, a marshmallow company hired a cook to develop recipes for the sugary concoction. 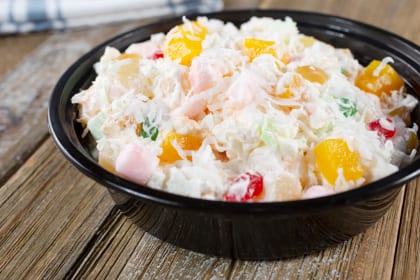 DO: ADD A LIGHT, CRUNCHY TOPPING

Notice I said “light.” Too many people add a boatload of brown sugar topping that turns the casserole into a dessert. I like a sweet crunch, but you don’t need that much to get the desired effect. If you follow a recipe, cut the topping in half. That should give you all you need. Sprinkle sparingly and if you have extra, save it for something else or dump it.

This is directly related to the crunchy topping. In addition to the sweetness, the crunchy topping provides a nice brown color that’s appealing to the eye. But if you don’t want all of that sugar, how do you get that nice top? Cheese! I say, please, no cheese. Yes, the cheese will brown, and the dish will look nice, but it won’t taste like sweet potatoes. It’ll taste like cheesy sweet potatoes, a pairing that’s as bad as pouring canola oil over chocolate cake. Some things just don’t go together. And while we’re on the cheese topic, don’t mix the cheese into your sweet potatoes. Cottage cheese in sweet potatoes? Sharp cheddar? Parmesan? No thanks. Skip them all.

DO: SERVE IT RIGHT AWAY

This is the fail-safe method if your casserole comes out a little dense. Serve it right away and pour a little gravy on it. Gravy hides anything.

Yes, it’s easy, and it’s fast. But if you’re making an apple pie, you know fresh apples are much better. The same with sweet potatoes. You can’t hide the freshness and you can’t roast canned potatoes in an oven in any meaningful way. Without that roasting, you don’t get that caramelization that makes a huge difference. 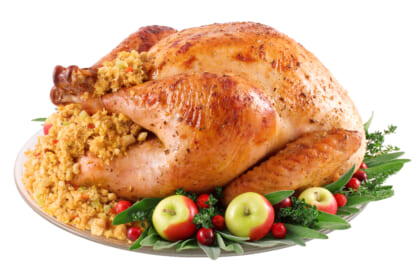 OTHER THINGS NOT TO DO:

Don’t add a bunch of stuff to the dish. No ham, bacon, turkey, etc. That’ll take away from the casserole, and those ingredients serve no purpose since you’ll have a table full of meat anyway. Don’t try to make a healthy casserole. Load it up with the stuff that makes it taste good, like butter, honey and sugar. You don’t eat like this every day. Do not microwave your sweet potatoes. Yes, it saves time, but roasting adds so much more flavor.

You can make the sweet potatoes the night before, although it’s best to let them get cold. Here’s a very simple recipe I’ve used for years.

Slice the potatoes in half and, using a spoon, remove the flesh. Add to a large mixing bowl. Add in the cinnamon, cream, nutmeg and cumin, Using a mixer, blend until smooth. Set aside.

In another mixing bowl, beat the eggs until stiff peaks form. Gently fold the eggs into the sweet potatoes. The mixture should be light and airy. Place in the heavily buttered baking dish.

Make the topping and sprinkle it over the sweet potatoes. Bake for about 35 minutes until the topping is browned. Serve immediately.