The star received the Television Icon Award at the inaugural ceremony.

As theGrio previously reported, the inaugural ceremony brought some of the brightest stars in Black Hollywood, tech, business and other sectors together under one roof at the Beverly Hilton Hotel. Joining Tyler Perry, Patti LaBelle, Jennifer Hudson and other honorees, Queen Latifah helped make the night a memorable one during her acceptance speech for the Television Icon Award.

“It’s great to be in this inaugural class of this award,” Latifah disclosed, reflecting on her experience at theGrio Awards later. “This is crazy. It’s beautiful. It’s absolutely beautiful. It’s a great assembly of people who have done so much. And I’m honored to even be in this group of people.”

Speaking to the other honorees, like American attorney and civil rights leader Ben Crump and Olympic gold medalist Allyson Felix, Queen Latifah said, “I mean, I’ve watched them do their thing and I cheered them on and I’ve cried over what they’ve had to do when it comes to Ben Crump. But I’ve been behind them all from a distance. So to be right there in his presence and to hear him and look at Allyson Felix, who I’ve cheered on from all around the world, watching her represent our whole nation. You know, and Tyler [Perry] and Norman Lear, I mean, I wouldn’t even be on television if it wasn’t for Norman Lear giving us that platform and really showing us, as us, and with humor and with intensity sometimes and doing it consistently throughout the years.”

She also expressed gratitude to family members in the audience — including aunts and cousins — and reflected on various aspects of her career, from her early days rapping to her “Living Single” period to her movie stardom and beyond. In a particularly moving moment, Latifah addressed her peers about the power of “leaving the door open for Black talent” in the industry coming up behind them. 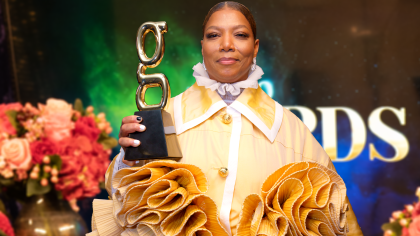 “I pray that God continues to give me the strength to fight the same devilishness that I’ve seen since I was a child,” Queen Latifah said. “To fight the same wrongs that are still here … to share this. Don’t open that door and let it close behind you! What’s wrong with you? Leave it open. Leave it open.”

Speaking to Black leaders in the audience representing various fields, she added, “This should not be an anomaly. This should be commonplace.”