Will Smith and Antoine Fuqua on ‘Emancipation’: ‘It had to be inspiring in spite of the situation’

“Emancipation” is here. The brand new Will Smith movie from filmmaker Antoine Fuqua is officially in select theaters before its debut on Apple TV+ later this month.

As theGrio previously reported, “Emancipation” is Smith’s return to film following his Academy Award-winning performance in “King Richard” last year. The project sees the actor starring as Peter, an enslaved man and the subject of photos of “Whipped Peter,” published in 1863. His most famous photo is “The Scourged Back,” misidentifying Peter as “Gordon” when published by Harper’s Weekly.

Speaking to Cortney Wills of theGrio, Smith and director Antoine Fuqua broke down the project, why this is the perfect time for this story, and more.

“I hope that this film does a lot of what the image of ‘Whipped Peter’ did in the global community, which is to be able to cultivate compassion,” he continued. “That people will watch this and whatever fear or anger is in our hearts, that these images, these performances, the brilliant story that Antoine has put together can help to build a bridge of compassion and understanding for the difficult conversations that we’re currently having, that we’re going to be having more ferociously in the coming days.”

Fuqua also had specific intentions when telling this story, deliberately wanting to tell an “inspiring story” in some way. “It had to be inspiring in spite of the situation,” he explained. “It had to be about love. Love for your fellow man, unselfish love, strength, courage, faith … all those things have been included in that story. That’s what we hope that we’ve done.” 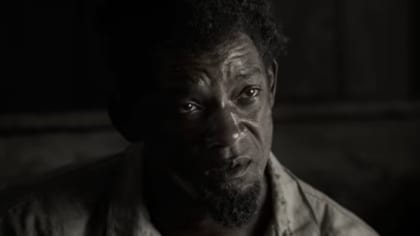 “Peter as a character inspired us to tell this story all this time later,” he added. “It was considered the first viral image of the world, a rallying cry against slavery.” He continued, “It’s important to tell these kinds of stories to entertain people, of course, but also, we made this movie a couple years [ago] and what you see in the world, there’s a lot of chaos that’s even happened since making the film. You have to know where you come from to move forward.”

Both Smith and Fuqua spoke of their hopes that all kinds of people will see these types of stories, not just Black viewers.

“One of the things that is driving me right now, even a term like ‘Black history,'” said Smith. “I don’t want us to refer to it as ‘Black history’ because somehow when we call it ‘Black history,’ it exempts others from having to learn it. This is American history, this is world history. This is history that is equal and on par to all other people’s histories that we would consider important and valuable.”

He concluded, “My hope with this film is to elevate our history on the world stage.”