MLK Day and the rise of modern hate in America

In an interview with theGrio, King's daughter Bernice King says in the United States, “we don't know how to deal with hate.”

On what would’ve been the 94th birthday of Dr. Martin Luther King Jr., the civil rights icon who helped turn the tide on racial inequality in the United States and abroad, hate in America continues to dominate decades after his 1968 assassination.

According to data compiled by the extremism research center at California State University at San Bernardino, over the past four years hate crimes have continued to climb.

As reported by VOA News, “U.S. hate crimes have been on the rise in recent years, driven by factors ranging from a surge in anti-Asian sentiments during the COVID-19 pandemic to anti-Black animus in reaction to racial justice protests that broke out across America in 2020 after the killing of African American George Floyd while in police custody.”

Brown was one of eight students taught by King at Morehouse College from 1961 to 1962. He is one of only two surviving members of the small social philosophy class. 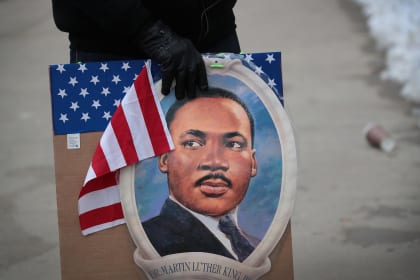 Also Read:
Where does Black America stand in MLK’s vision for economic inclusion?

Brown offers a simple solution to the modern rise in hate in America: “We need to get to know each other, and particularly the majority needs to understand that we are human.”

Civil rights leader Al Sharpton tells theGrio, “unless we aggressively work along with the [Assistant] Attorney General [for Civil Rights] Kristen Clarke and [Associate Attorney General] Vanita Gupta and prosecute people, and back them up, we’re going to continue to see it happen.”

Dr. King was disciplined in his commitment to rise against the racial hate of his time through non-violent disobedience. However, his violent death was in great contrast to what he preached and how he lived.

In an interview with theGrio, King’s daughter Bernice King says in the United States, “we don’t know how to deal with hate.”

“The problem is most of us become hateful in the face of hate when we behave almost like the hateful people. And we don’t know the power of love,” says the youngest child of MLK. “He would bring people together. He brought them with a certain spirit in the heart and attitude.”

She explained: “We think love means ‘Oh, that’s weak and wimpy’ and people get away with stuff. No … Dr. King and his love did not allow people to get away. He used the energy of love to expose — not just to the public, but sometimes people need to see their own stuff. And sometimes when it’s so much [hate] in you, you don’t see it until somebody confronts it with something else.”

As the nation celebrates the birth of the late iconic civil rights leader, this year will also mark the 60th anniversary of the 1963 March on Washington, where King delivered his famous “I Have a Dream” speech. Organizers of this year’s gathering to commemorate the march will focus on a demonstration in Washington responding to the rise in hate. 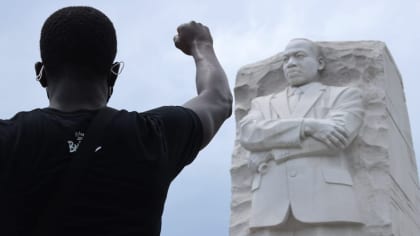 Also Read:
On Martin Luther King Jr. Day, let’s dedicate ourselves to carrying on his work

“People talk about what happened back in the day, [but] just a few months ago, ten Blacks were killed in a supermarket in Buffalo just because they were Black,” says Sharpton. “Not only Blacks in the supermarket, but two synagogues were also shot up last year; a gay club was shot up, and people died, [including] Latinos.”

Last September, the Biden-Harris administration hosted a White House summit addressing the rise the hate in the United States. Sharpton says he and others are working to ensure that the administration follows up on its commitment to tackling hate crimes. He wants to see the Biden White House “increase the implementation and enforcement of hate crime laws and raise new laws.”

President Joe Biden honored MLK Day this year by traveling to the historic Ebenezer Baptist Church, where King pastored from 1960 until his assassination. The president delivered a sermon at the invitation of its current senior pastor, U.S. Senator Raphael Warnock. On Monday, he will give remarks at Sharpton’s annual MLK Day breakfast in Washington, D.C.

Last week, White House press secretary Karine Jean-Pierre told theGrio, “This holiday as every holiday when we talk about the legacy of Dr. Martin Luther King, when we remember him on his birthday, has always been a critical moment for this president.”

Jean-Pierre said the White House is continuing its work to make sure that “no one is forgotten” and that its policies and personnel “represent the country,” noting that the Biden-Harris administration is “the most diverse administration in modern history.”

Sharpton reminds that while there have certainly been advancements for Black Americans since King’s untimely death, there’s much more to go.

“We have political clout, but economically, we’re still doubly unemployed to whites. We still can’t get contracts and media outlets and other things that whites get it,” he says. “The dream wasn’t just to get in position. The dream was to get those positions so we can empower everyone.”