Quincy Jones says he has 22 girlfriends, only dates younger women

The 84-year-old music producer talks being a "dog" and having no regrets. 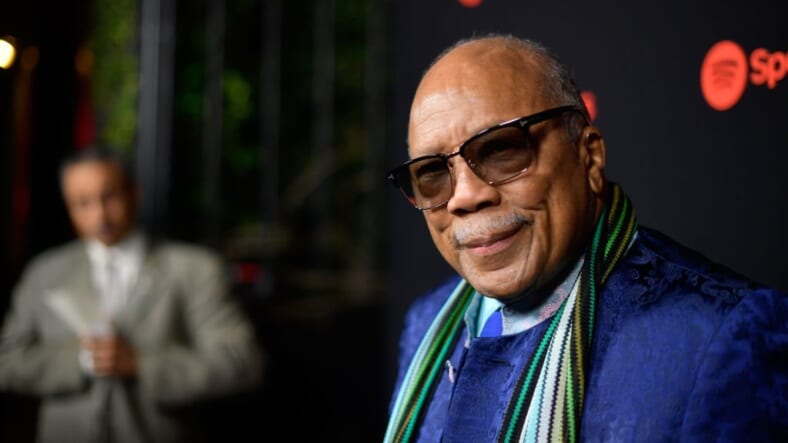 In a new interview with GQ, Quincy Jones admits that he has 22 girlfriends whose geographical locations span across the globe.

Jones, who has been married three times, was candid about the fact that he dates around, saying, “I got 22 girlfriends… Everywhere. Cape Town. Cairo. Stockholm — she’s coming in next week. Brazil — Belo Horizonte, São Paulo and Rio. Shanghai — got a great girl over there from Shanghai, man. Cairo, whew.”

And if you’re wondering, Jones makes it clear that the women all know about each other. He says it’s simply the “smart” thing to do.

Jones also referred to himself as a “dog” and shot down the idea of dating women his own age.

“For what, man? There’s nothing… No upside. You gotta be kidding. I got me some technology [at his mansion] that keep fat and old away from here. Buzzes if they’re too old. But you’d be surprised… These women, the young ones, are aggressive now. Oh, my God, they’re fearless, man. All over the world,” he said.

Earlier in the interview, he had explained the age range: “Well, my daughters gave me new numbers, because they kept saying, ‘Dad, you can’t go out with girls younger than us.’ I said, ‘Y’all are not young anymore.…’ So the new numbers are 28 to 42. They gave them to me.”

As for why he’s been a “dog,” Jones said it was “probably because I didn’t have a mother. And the big bands, that’s like the school of the dogs. Traveling bands? Every f***ing night it was like the girls coming through Neiman Marcus: ‘Oh, I like trumpet players,’ ‘I like sax players,’ ‘I like guitar players’… Rita Hayworth, all of them. It was unbelievable, man. Frank was always trying to hook me up with Marilyn Monroe, but Marilyn Monroe had a chest that looked like pears, man.”

But when asked to elaborate on missing out on Marilyn Monroe, he said, “Let’s not talk about it.”

Instead, you can sum up Jones’ life philosophy in this quote he gave to GQ: “Je ne regrette rien de tout. I don’t regret sh**.”