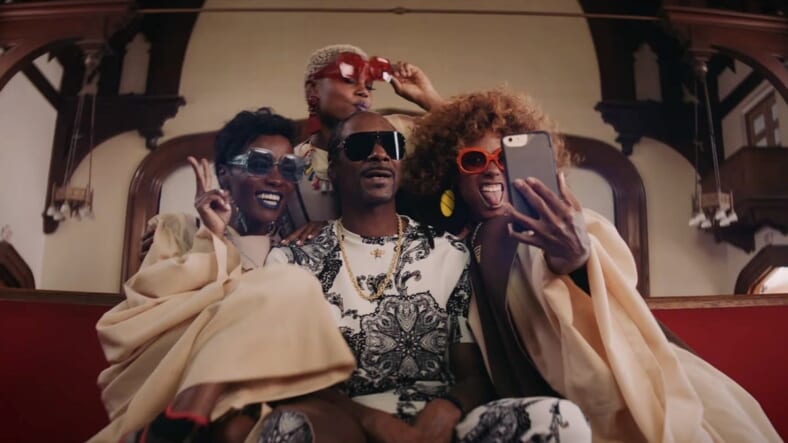 Snoop Dogg promised to record a gospel album and that is just what he is going to do. Bible of Love will be a 32-track double album and it will feature such artists as the Clark Sisters, Tye Tribbet, Faith Evans and Rance Allen. The album is set to be released on March 16th.

Snoop Dogg has already released a video for the seven-minute closing track, Words Are Few and it features B Slade and Snoop performing in a church. This track was first released in September of last year.

The rapper has been hinting he was working on a gospel album since 2017. In a Beats 1 interview, he said, “It’s always been on my heart. I just never got around to it because I always be doing ‘gangsta’ business or doing this or doing that. I just felt like it’s been on my heart too long. I need to do it now.”

Snoop Dogg has marked the coming arrival of Bible of Love by headlining a set at the 19th annual Super Bowl Gospel Celebration just outside Minneapolis. He is the first secular artist ever to headline the event.

“The record’s all about love from start to finish,” Snoop said there. “That’s the way you change the world, by putting love in it.”

“Well, tonight is a night can I honestly say I didn’t see coming. The notorious @SnoopDogg performed at the super bowl gospel celebration! Yes gospel/ performed! I won’t give it away but please watch Saturday night on @BET. I pray God continues to touch his heart!”

While people may have been surprised that Snoop headlined the event it has led some to think he is a changed man. As far as that goes, we will have to wait and see. Either way, the Bible of Love is sure to be a hit.