Never forget: Justin Timberlake once dissed Prince on Timbaland’s ‘Give It To Me’ 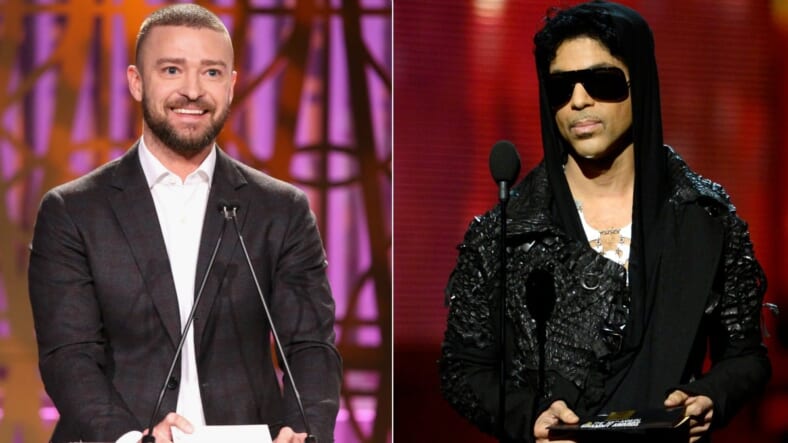 Justin Timberlake is stirring up all kinds of controversy lately. He has been slammed for working with Woody Allen on a film and there have been some wildly differing views on his new Man of the Woods album. There has also been upset over his album release and listening party at Prince’s Minneapolis estate, Paisley Park.

It wasn’t just the location that Prince fans were upset about, it was the fact that JT would be serving alcohol at his party. Prince was a devout Jehovah’s Witness and abstained from drinking. Many felt it was disrespectful of Timberlake to have people drinking at Prince’s estate.

The party was revealed earlier this month and Prince fans were quick to point out on social media that Timberlake has dissed Prince in the past on Timbaland’s 2007 song, “Give It To Me.”

In the song, Justin sang, “We missed you on the charts last week/ Damn, that’s right you wasn’t there/ Now if se-sexy never left, then why is everybody on my s**t/ Don’t hate on me just because you didn’t come up with it.”

The lyrics are in reference to Timberlake’s 2006 song “SexyBack.” That song topped the charts though it was initially panned by music critics. It was also a dig at Prince who made a harmless comment about Justin’s song during a performance at a post-Emmy Awards party in 2006.

Prince was reported to have said, “For whoever is claiming they are bringing sexy back, sexy never left!”

Then, in January 2007, Timberlake gave the award for Best Original Song at the Golden Globes. Prince was the winner for his track “Song of the Heart” from the animated movie Happy Feet. He wasn’t able to get up on stage to accept the award because he was stuck in traffic at the time.

Timberlake accepted the award on his behalf and made fun of Prince’s short stature.

This may have all happened a decade ago but Prince fans never forget and they have been sharing their displeasure of Justin Timberlake all over Twitter as JT gets ready for his halftime show at the Super Bowl.

At the official Pepsi Halftime Show press conference, Justin was asked about his listening party and he said that he considered Paisley Park a sacred place. He was not asked about the backlash he has received from fans or his past Prince lyrics.