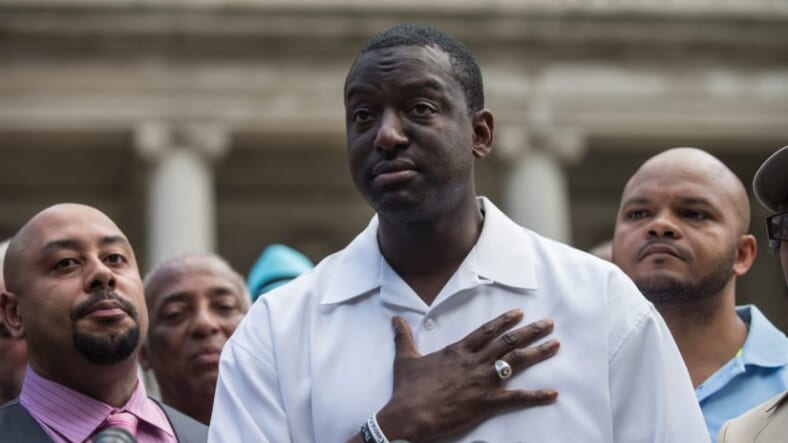 Dubbed the Central Park Five, the Harlem teens were charged with the brutal rape and assault of a white investment banker who was jogging in Central Park. The boys were convicted and each sentenced to time in prison—from five and a half years to 13 years.

Ultimately, their innocence was proven when Matias Reyes confessed to the crime. DNA evidence further proved their innocence. The Central Park Five convictions were vacated in 2002 and in 2014, New York City paid them a $41 million settlement.

Despite the vacated convictions and the Reyes confession, Trump has over the years refused to acknowledge that he was wrong. He even scoffed at the settlement. Recently, the President took to Twitter to opine about the importance of due process and how lives are being ruined by mere accusations.

Salaam and his fellow Central Park Five cohorts take issue with what they see as Trump’s hypocrisy. TheGrio interviewed Salaam to find out more about the Central Park Five’s complicated relationship with the 45th president.

theGrio: You and Raymond Santana said recently on CNN that you are beyond an apology from Donald Trump at this point. If Trump did offer an apology today, would you accept it?
Yusef Salaam: If he did apologize, he wouldn’t do it in public. It would be one of those secret, closed door meetings he likes to have. I’ve heard people quote Trump, bragging about never apologizing. To err is human. Every single person makes mistakes. The beauty of being human is acknowledging and learning from those mistakes. That’s how you grow. Trump does not believe in that. We don’t have a democracy in the White House, we have a complete idiocracy.

theGrio: Would you accept an offer from Trump to meet in private?
Yusef Salaam: Absolutely not. There’s no way I would go meet in private and then walk out all smiles for some photo op. We’re upset with Kanye West, Steve Harvey, the pastors, and all those people who had these closed door meetings with Trump and walked out grinning and shaking hands. You’re making it seem normal to be in bed with the devil. It’s disgusting.

theGrio: Those meetings are a sharp contrast to Trump’s relationship with the Central Park Five.
Yusef Salaam: Exactly. We have a 30-year history with Trump. The Central Park Five was publicly dragged through the mud. Our parents, siblings, and loved ones suffered as well. Raymond Santana’s nephew said something really interesting to me that made it that much clearer how much our families endured. When Raymond’s nephew was in school, his teachers harassed him. He was actually assaulted by one of them. He had to have reconstructive surgery on his face. At the time, we had been in prison for years, so he didn’t know the extent to which we had been vilified. Our families had no choice but to suffer in public. Trump took out full page newspaper ads calling for our deaths. There’s no way I could entertain the thought of a private meeting with him about anything.

theGrio: What went through your mind when you heard Trump talking about the importance of due process and not wanting to ruin lives because of allegations? Yusef Salaam: What we’re seeing is beyond wrong. Trump is essentially creating new laws for different people. He’ll follow due process for himself and the good ol boys in his network, but everyone else suffers. We heard out of Trump’s own mouth that he is guilty of violating women, yet the only person who felt the consequences was the man who lost his job. Compare that situation to something like the cash bail system, which actually does ruin lives. How many Kalief Browders have there been, and we didn’t even hear about them?

Even when we have camera footage available to show injustice, Trump’s version of the legal system makes sure that corrupt police officers are protected. There are so many people who have been mowed down by the spiked wheels of “justice.”

theGrio: After all these years dealing with Trump and hearing his statements, does anything he says ever surprise you anymore?
Yusef Salaam: I am completely amazed at times that other people are surprised by him. We have historical amnesia. We think this guy is going to wake up one day and all of sudden be this kind, loving, empathetic person? At 71-years old, he is who he is with a long and well-documented track record.

Every single day, we turn on the television and he’s giving us [the Central Park 5] more ammunition for our arguments. We will continue making sure that people know the truth. We’re supposed to be in this “woke” world, right, and yet, we live awake in a nightmare. Sometimes it seems like a dream, but the nightmare is real. This is reality. I’m still hopeful about the world in general, but as they say, there’s no justice, there’s just us.