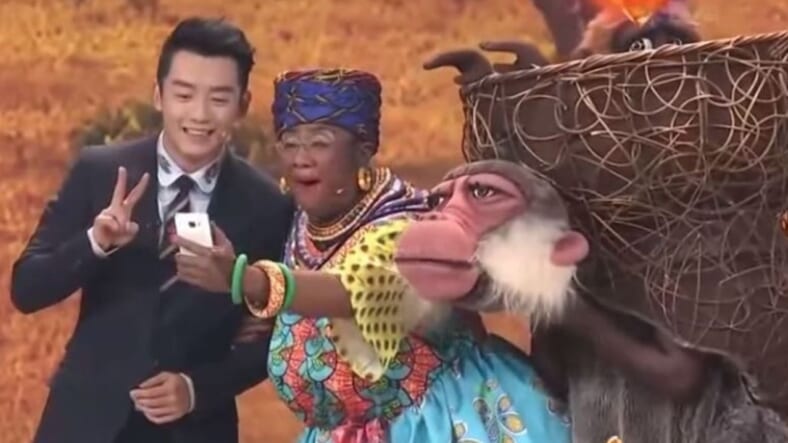 The day when we are not highly offended by the racist connotation behind blackface will probably be the day that hell freezes over. So someone needs to tell that to the producers of a comedy sketch show in China.

To celebrate China’s Lunar New Year, a comedy sketch featured a woman in blackface. And unfortunately the it didn’t stop there. The actors performed in monkey and giraffe costumes along with exaggerated butts and baskets of fruit on their heads.

–Black Panther Obsessed? How to not get fired after seeing the movie–

The offensive sketch was part of the four-hour CCTV New Year Gala. The show, which was believed to garner up to 800 million viewers, making it one of the most highly watched shows in the world according to NY Daily News.

According to NY Daily News, “the controversial segment was meant to celebrate  Chinese-African relations.” But during the show “a black woman can be seen asking the show’s host to pose as her husband when meeting her mother in order to avoid being set up on a blind date. A Chinese actress playing her mother—in blackface—enters, followed by an actor in a monkey costume.”

The aftermath resulted in many people speaking out against the show and its racist implications, with one person writing online that “CCTV’s racist show during Spring Gala shook me and made so ashamed of China and my people,” Sky News reports. Sky News also quoted another person, embarrassed by the show, “Imagine if the US State of the Union even had a white guy with yellow face, a rice farmer’s hat, buck teeth, and speaking in stereotypical Chinese accent.”

The NY Daily News quotes 80-year old Zhou Hengshan, “It’s normal for Chinese actors to dress up like foreigners when performing a foreign play. This wasn’t meant to demean any specific ethnic group.”

Pushing back against stereotypes

A similar story reported earlier this year included another Japanese team comedy team using blackface in their comedy skits. During a special that aired on New Year’s Eve, the Downtown comedy troupe used blackface on television as Masatoshi Hamada impersonated the character of Axel Foley, who Eddie Murphy played in the 1984 film Beverly Hills Cop.

Baye McNeil, a columnist for The Japan times, blames more than just Hamada for the tasteless skit, he blames the entire writing team for executing such a racist trope.

Ever since the 1800s, blackface has been a part of Japanese culture and it still persists in many facets of Japanese entertainment even today, including both music and television.

McNeil said, “I see a disregard for the feelings and for the impact his actions have on the lives of actual black people. I understand he has a job to do, but if he can’t do his job without offensive racial mimicry and blackface, then that’s just sad. He needs new writers.”

The Lunar New Year skit also praised Chinese-African cooperation, reportedly showing how much Africans benefit from Chinese investment and how grateful they are to Beijing. At one point, the African mother in blackface exclaims how much she loves China.