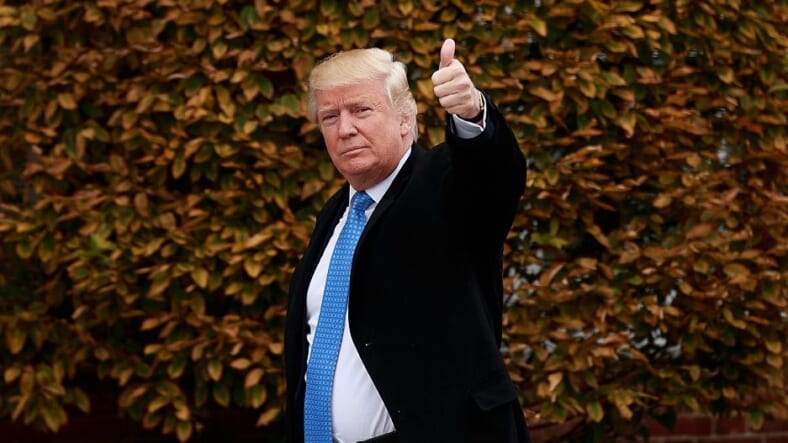 While Florida parents were prepping to bury their children, who killed in a gruesome Florida high school shooting, President Donald Trump was reportedly teeing off just miles away.

While White House officials have not confirmed whether Trump was golfing they did say that he avoided playing over the weekend as a mark of respect for the victims.

Last Friday, Donald Trump sparked critism after meeting with shooting victims and taking photographs with the police officers and medical staff with a broad smile and a tasteless thumb’s up pose.

In a marked departure from his predecessor there is not indication that Donald Trump plans to attend any of the funerals for the 17 victims who were gunned down by Nikolas Cruz last week. President Obama notably attended the services for those killed in mass shootings, including the funeral of the nine church-goers gunned down by white supremacist Dylann Roof at the Emanuel African Methodist Episcopal Church in downtown Charleston, SC.

On President’s Day, several teenagers staged a protest to call for better gun reform in the wake of the deadly school shooting in Parkland, Florida last week.

A group called Teens for Gun Reform had asked for 17 volunteers to lie down outside the White House for three minutes, the amount of time that Nikolas Cruz spent shooting at students and teachers at Marjory Stoneman Douglas High School. But while they had originally asked for 17 people to represent the 17 people killed in the shooting, over a hundred people responded to the call for action.

“The two of us have organized this protest in solidarity with all of those who were affected by the tragic school shooting in Florida last week,” Eleanor Nuechterlein and Whitney Bowen, the teen organizers, said in a statement, according to CNN. “We call on our national and state legislatures to finally act responsibly and reduce the number of these tragic incidents. It’s essential that we all feel safe in our classrooms.”

Rep. Don Beyer, a Democrat from Virginia, attended the event and noted how impressed he was that young people are leading the political charge in the wake the deadly rampage by Nikolas Cruz.

“I was very proud of them,” Beyer said. “The ground was cold and wet. This is a holiday. But, yeah, they’re being politically active.”

“Historically, it’s the old people that participate in the elections and do all the volunteering, so this was great. And hopefully it portends a sea change in our attitude toward gun safety legislation.”

Across the country students are stepping to the forefront of the gun control debate by scheduling school walkouts and a march in Washington.

Ten days later, on March 24, students from Parkland, Florida, where the shooting occurred, are planning their own “March for Our Lives” rally in Washington, D.C.

The protest, according to its mission statement, will “demand that a comprehensive and effective bill be immediately brought before Congress to address these gun issues.”

In the wake of the deadly school shooting by Nikolas Cruz, Donald Trump is reportedly open to the idea of improving a federal background checks system for gun purchases.

On Monday, Principal Deputy Press Secretary Raj Shah released a statement about the bill that Sen. John Cornyn, a Texas Republican, and Connecticut Democratic Sen. Chris Murphy, have introduced. The bill, which Shah said Trump had spoken to Cornyn about, would reportedly beef up the reporting system for offenses that would keep people from purchasing guns.

“While discussions are ongoing and revisions are being considered, the President is supportive of efforts to improve the federal background check system,” Shah said, according to CNN.

Thus far, the only action Donald Trump has taken on guns since taking office has been to relax restrictions keeping mentally ill people from acquiring guns.

According to both the Associated Press and ABC News, Nikolas Cruz was part of a group called the Republic of Florida, which wants to create a white-only state in Florida.

According to NBC News, Nikolas Cruz has been charged with 17 counts of premeditated murder and is looking to plead guilty in exchange for a sentence of life without parole.