The former First Lady meant no harm, but got roasted anyway for getting the facts wrong. 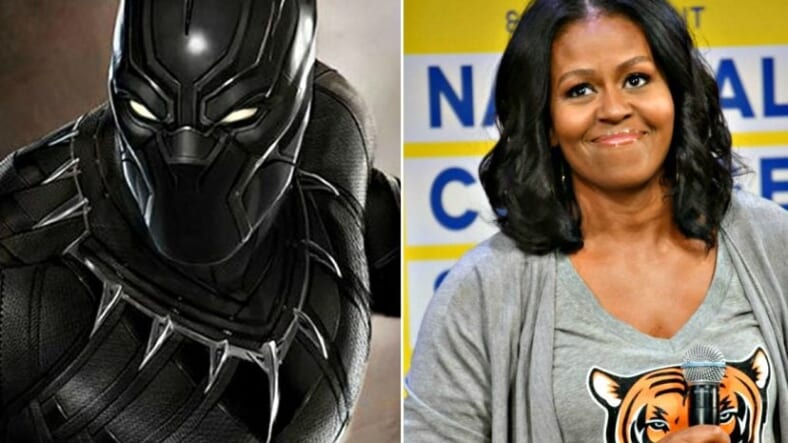 Former First Lady Michelle Obama had high praise for Black Panther after its record-breaking release this weekend and took to social media to let the world know her thoughts.

“Congrats to the entire #blackpanther team! Because of you, young people will finally see superheroes that look like them on the big screen,” Ms. Obama tweeted after seeing the movie.

“I loved this movie and I know it will inspire people of all backgrounds to dig deep and find the courage to be heroes of their own stories.”

But here’s the thing: Black Panther may be the biggest blockbuster film featuring Black actors and directed by a Black filmmaker, but it certainly isn’t the first Black superhero film. Yes, it’s the first film of it’s kind in the Marvel Cinematic Universe, but it doesn’t have the distinction of being the first as is implied by the former First Lady’s tweet.

Congrats to the entire #blackpanther team! Because of you, young people will finally see superheroes that look like them on the big screen. I loved this movie and I know it will inspire people of all backgrounds to dig deep and find the courage to be heroes of their own stories.

As a result, the left-wing trolls and super comic-centric fans felt the need to set Mrs. Obama straight. Several of them were quick to point out that there were three huge Blade movies, starring Wesley Snipes as well as Will Smith‘s character in Hancock.

“Do I come from a parallel universe?” one Twitter user wrote in a reply to Obama’s tweet. “Is that why nobody seems to remember the 3 very successful Blade movies? You know, the ones with the black Marvel hero Blade. Guess I may have imagined them and this film is really groundbreaking. Sorry Mr. Snipes.”

That reply, according to the Washington Times, was liked over 1,300 times.

Black Panther, named for the first Black comic book superhero (created in 1966 by Stan Lee and artist Jack Kirby) is the 18th film to be spawned from the Marvel Cinematic Universe (MCU). The high-octane film tells the gripping story of T’Challa who, after the death of his father, returns home to his technologically advanced African nation to take his rightful place on the throne as the king of Wakanda. Tested by powerful outside forces and a dangerous enemy, T’Challa must fight for the fate of his beloved country and the entire world.

The movie has been breaking records, drawing in positive reviews, and inspiring many people with its beautiful representation of the Black experience. While it is indeed worthy of our praise and Mrs. Obama’s point about our representation in media is dully noted, social media will never let anyone forget that this is not the first time Black super heroes have succeeded on the big screen.

What do you think Grio fam? Did Ms. Obama deserve to be schooled?