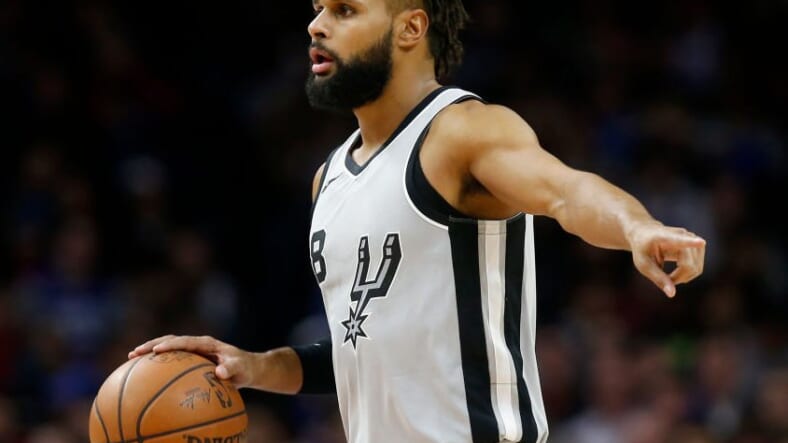 PHILADELPHIA, PA – JANUARY 3: Patty Mills #8 of the San Antonio Spurs dribbles the ball against the Philadelphia 76ers in the first half at Wells Fargo Center on January 3, 2018 in Philadelphia, Pennsylvania. NOTE TO USER: User expressly acknowledges and agrees that, by downloading and or using this photograph, User is consenting to the terms and conditions of the Getty Images License Agreement. (Photo by Rob Carr/Getty Images)

San Antonio Spurs player Patty Mills should have been celebrating the team’s 110-94 victory against Cleveland but the revelry was spoiled by a Cavaliers fan spewing racist taunts.

Patty Mills, a native Australian, was setting up for a free throw at the line, with just 2:29 remaining in the fourth quarter when the incident happened. The fan could be heard through the arena microphones making the racial remarks toward Mills, yelling: “Hey, Jamaican dog. They want their bobsledder back.”

A Twitter user sent the video to Mills, asking if he had seen it, and he responded saying:

“Thanks @thats_Z_Truth. I am a proud Islander. Like my Jamaican Brothers, me & my family in the islands of the Torres Strait have experienced racial slurs for decades. Hope your efforts will enlighten this confused, hateful fan. #BlackHistoryMonth”

Haters gonna hate and even with racist rant rounding out Black History Month, Mills still gets to celebrate moving into fourth all-time on the franchise’s three-pointers made list, reportedly passing Matt Bonner, after his second three-pointer of the night and 657th of his Spurs career.

Racist fans were ejected from the hockey game between the Chicago Blackhawks and the Washington Capitals for racist comments made toward Washington’s Devante Smith-Pelly.

A Capitals spokesperson confirmed to ESPN that the incident had taken place and that four fans were removed from the game.

The incident, where fans chanted at Devante Smith-Pelly while he was in the penalty box, was later condemned by both the Chicago Blackhawks and the Washington Capitals as well as by the National Hockey League.

“There is absolutely no place in the game of hockey or our country for racism. I think it’s disgusting. There’s no place for it. Athletes in our country don’t deserve that. It just shows ignorance,” said Capitals coach Barry Trotz.

On Saturday, the Blackhawks also responded with a statement saying, “We were made aware of an incident at tonight’s game involving a small group of attendees who made harmful comments directed at Washington Capitals player Devante Smith-Pelly. The fans were immediately removed and we apologize to Smith-Pelly and the Washington Capitals organization. We are committed to providing an inclusive environment for everyone who attends our games and these actions will never be tolerated.”

“The League fully supports the actions taken by the United Center and the Blackhawks to eject the offenders and would expect the same response to any similarly unacceptable behavior at any of our arenas,” the statement read.

Thankfully the Cleveland Cavaliers identified the fan who taunted Patty Mills as he shot free throws with the racist remarks of “Hey, Jamaican dog. They want their bobsledder back.”

The unidentified individual has reportedly been indefinitely banned from the Quiken Loans Arena.

“I think it’s fair to say that I’ve been called a lot worse,” Patty Mills said in an interview with KSAT. “But it was a small example to shine a little bit of light on the fact that racism still does exist in sports today. We as a whole can do a lot more to be in a situation like this today, and help educate the kids to be able to be proud of who they are and where they come from, and have the feeling inside to be able to express all of that.”