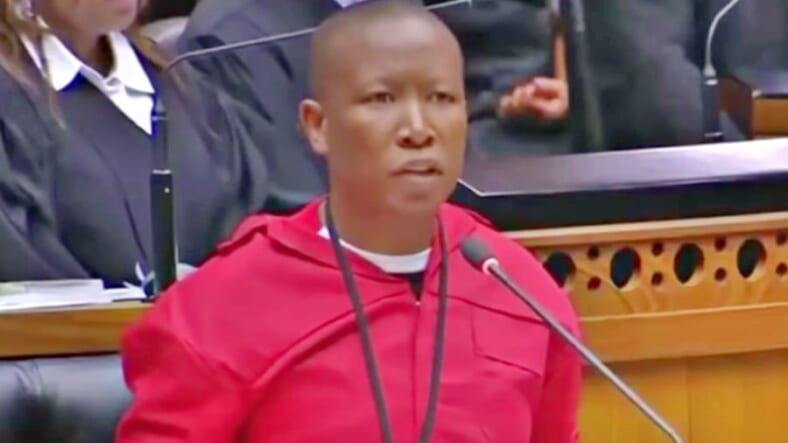 A South African politician is adamant about his plans to unseat a white mayor in a push to give land back to Blacks in the nation.

Julius Malema, didn’t mince words when he said he wants to remove Nelson Mandela Bay mayor Athol Trollip specifically because he ‘is a white man’, according to the Daily Mail. Malema leads the country’s Economic Freedom Fighters opposition party.

Malema admitted: “We are starting with this whiteness. We are cutting the throat of whiteness,” while giving a speech in Johannesburg.

Trollip is a member of the Democratic Alliance which, with the backing of Malema’s EFF has governed Port Elizabeth along with Johannesburg and Pretoria. However, that changed with the resignation in February of president Jacob Zuma, who Malema has strongly criticized.

Malema’s sentiments are aligned with South Africa’s recent initiative to take back land from white landowners. In a move designed to shake up the disparities of land ownership in South Africa, new president Cyril Ramaphosa has called for the redistribution of farming lands.

That doesn’t sit well with white South African farmers who reportedly now control about 73 percent of the country’s profitable farming land. 10,500 people have reportedly signed a petition calling for President Donald Trump to allow white South African landowners, who have their land stripped as a result of the country’s expropriation vote, to emigrate to the United States.

White South African farmers believe they are being pushed out of the country and stripped of their land without compensation, according to news.com.au.

Malema wants to expedite the process of taking the white landowners property and says it will be redistributed to its ‘rightful owners’ — meaning economically disadvantaged blacks.

“We want to give land to our people, it is going to happen, it will happen in our lifetime, whether they like it or not. The land will be returned,” he said.

The South African parliament is in support of President Ramaphosa’s measure to redistribute land and passed the motion 241-83 in favor.

Malema is positioning to run for president in 2019 and he wants to smooth over his relationship with the African National Congress after being expelled from the ANC. He founded the EFF in response to his exit from the party, which was once led by Nelson Mandela.