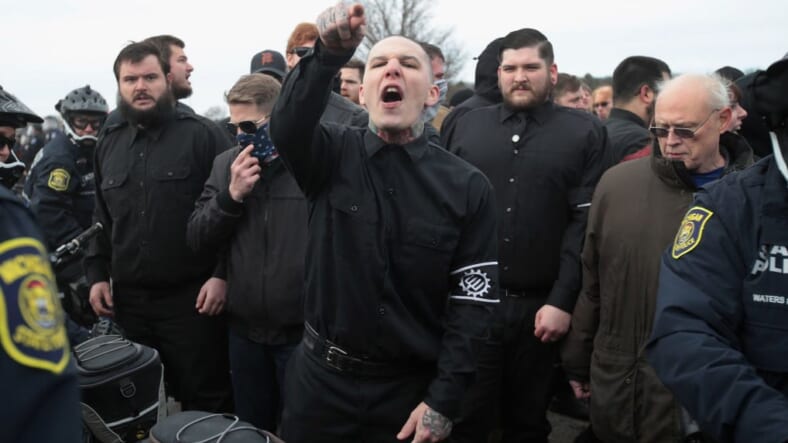 Activists Protest Alt Right Leader Richard Spencer’s MSU Appearance White nationalists clash with counter-demonstrators before the start of a speech by white nationalist Richard Spencer, who popularized the term ‘alt-right’, at Michigan State University on March 5, 2018 in East Lansing, Michigan. Spencer was granted permission to speak after suing the university which is currently on Spring break. (Photo by Scott Olson/Getty Images)

After a violent clashes erupted at a speaking event for white supremacist Richard Spencer at Michigan State University, police moved in to make arrests.

Protestors had turned out for what was scheduled to be a speech by white nationalist speaker Richard Spencer. The DailyMail reports that up to 500 protesters were in attendance.

Michigan State University students are currently on spring break, but many reportedly showed up for the speech. According to the Huffington Post, the protesters began demonstrating hours before the event. Police officers formed lines outside the auditorium in an attempt to protect people who had tickets to enter the event and see Richard Spencer speak.

MSU had to allow Richard Spencer the ability to rent the space on their campus after losing a lawsuit attempting to block the event.

It is reported that when the Traditionalist Worker Party arrived—the largest group of white nationalists anti-facist protesters attempted to block them from entrance.

Many fights reportedly broke out as people attempted to enter the Michigan State building to hear Richard Spencer.

Richard Spencer coined the term ‘alt-right,’ and popularized the idea of a future state exclusively for white people. He reportedly doesn’t like to be labeled a racist, instead he identifies his political philosophy as ‘Identitarianism’.

Richard Spencer has “made a career out of making genocide sound reasonable,” said protestor J.D. Took. “And we’re here to show him that it’s not, that it’s a threat to all of us.”

Spencer spearheaded the first (and second) tiki-torch marches in Charlottesville— the former of which led to the death of 32-year-old Heather Heyer.