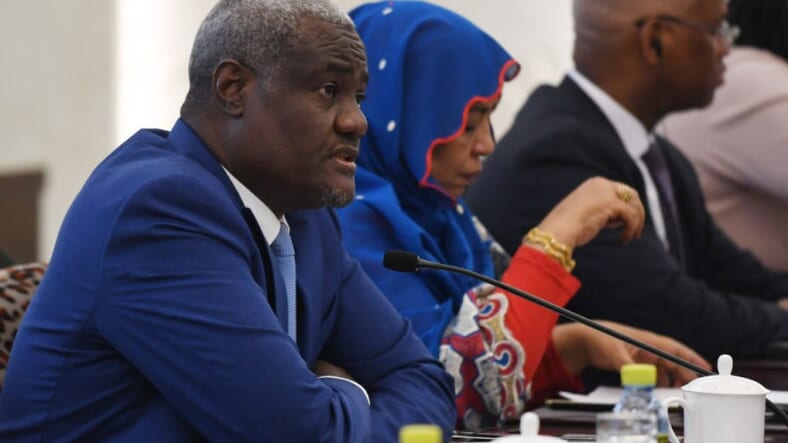 BEIJING, CHINA – FEBRUARY 8: African Union Commission Chairperson Moussa Faki Mahamat (L) speaks during a meeting with Chinese Foreign Minister Wang Yi on February 8, 2018 in Beijing, China. (Photo by Greg Baker-Pool/Getty Images)
African Union chief Moussa Faki Mahamat said he’s not mad at Donald Trump anymore.
Say what now?
According to Moussa Faki Mahamat, the chairman of the African Union commission, the president smoothed over insults he infamously made toward the African nations calling them s—hole countries—just in time for Secretary of State Rex Tillerson‘s visit.
Tillerson began his first African tour Thursday by meeting with Moussa Faki Mahamat to discuss security and counter-terrorism, trade and development, corruption and conflict in an hour-long meeting at the continental body’s headquarters in the Ethiopian capital, according to the Daily Mail.
–Watch Stacey Dash admit she’s clueless during MSNBC interview about her campaign–
Mahamat says Africa has now moved on from the slur.
“The incident is behind us; the visit by the secretary of state today is proof of the importance of relations between the different parties,” Moussa Faki Mahamat said in a joint news conference with Tillerson. “I want to add I am satisfied with the discussions I had with the secretary of state, notably the engagement of the United States to support Africa in the battle against terrorism.”
Nice to know he can speak for the whole continent.
Tillerson is on a ‘listening’ tour and reportedly plans to visit Djibouti, Kenya, Chad and Nigeria, all key allies in fighting terrorism in the region. According to the Washington Post, Tillerson ignored two questions about Trump’s incendiary comments choosing to emphasize America’s relationship with Africa.
‘The purpose of my trip is to listen to what the priorities of the countries here on the continent are and see where there is good alignment,’ said Tillerson.
–Nia Long on Chris Rock dating disaster and the savage one-liner that shut him down–

In an Oval Office meeting on immigration in January, President Trump reportedly used crass language in reference to immigrants from Africa, Haiti and other “shithole countries.”
“Why do we want all these people from ‘shithole countries’ coming here?” Trump reportedly told a bipartisan group of senators, according to CNN.
–Oscar voter reveals she didn’t vote for ‘Get Out’ claiming ‘they played the race card’–
The president’s comment was made during a meeting with six senators hoping to come to a compromise on immigration.
After Sen. Dick Durbin proposed to end the visa lottery in exchange for Temporary Protected Status (TPS) for countries like El Salvador, Trump reportedly interrupted him when Durbin got to Haiti.
Trump went on to ask why the US would want more people from Haiti and African countries, rather than countries like Norway. The president also asked if Haiti could be left out of the plan, reports the New York Times, “Why do we want people from Haiti here?”
—Hooters responds to backlash after racist firefighter spits at black child—
In response to the 15,000 Haitian immigrants who had arrived in the country, Trump reportedly said they “all have AIDS.” He went on to lament about the 40,000 Nigerians who would never “go back to their huts” in Africa.
Perhaps someone should remind Moussa Faki Mahamat of these remarks.