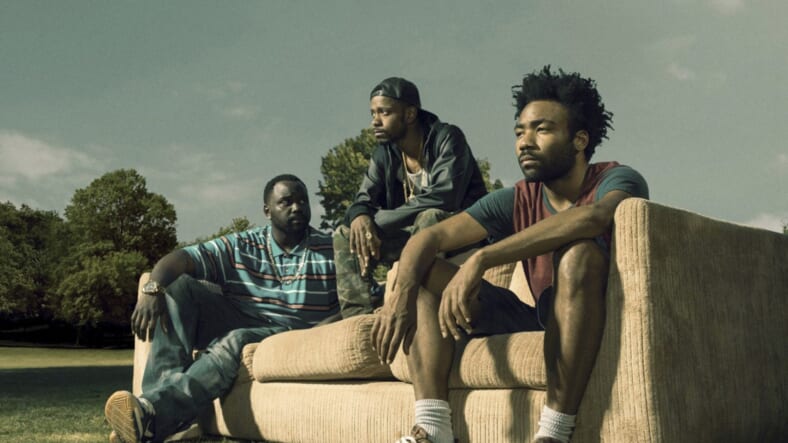 Remember Al’s (apparent) new apparent roommate Tracy (Khris Davis) from the conclusion of the season opener? Well, “Sportin’ Waves” is his episode to shine. But we’ll get back to him later.

The episode kicks off with Al (Bryan Tyree Henry) putting in work toward his primary source of income, which is selling weed.  The rap game is not paying his alter ego Paper Boi anything of substance despite the fact that his popularity is rising. He meets with a longtime connect to re-up, only to get robbed by him at gunpoint.

On any other show, this incident might lead to tough words and violence, but not in the world of Atlanta. The connect profusely apologizes for what he’s doing while insisting that Al will get paid off the good work of Paper Boi, then promising to pay him back at some point. There’s also a ridiculous struggle with child locks involved.

Making matters worse, Al’s other potential wholesalers are caught up in his fame. One sneaks a photo and posts it on social media, mid-deal. Another connects Al with his girlfriend – who created an acoustic rendition of Paper Boi’s single – via text, forcing Al to ditch his phone altogether.

The scenes play as indictments of how decidedly non-lucrative the modern music industry is, as well as the compulsion for people to share everything on social media. Since Al is 30-something and remembers when all of this was different, it clearly aggravates the hell out of him.

Al also seems perpetually aggravated with playing along with the annoying motions that can get him paid. He and Earn (Donald Glover) meet with a white dude in a marketing firm who calls himself “35 Savage” (because his surname is Savage and he’s 35. Get it?).

They bring a compact disc of Paper Boi’s music, which no one can play because younger Millennials probably don’t even know what CDs look like, and they struggle to get the music off Al’s phone, since Al is likely not as tech-savvy as all the 20-somethings in the building.

At the firm, we meet rapper Clark County (RJ Walker), a younger, hipper and more gamely emcee who fits in the environment far more comfortably than Al. The rapper underlines how hard the road will be for Paper Boi if he doesn’t get on board with the way things work.

Fresh Out the Pen

Now, back to Tracy. Dude just got out of the pen and perfectly represents the contradictory behavior that serves as a detriment to many ex-cons. He’s motivated to change but hasn’t really learned shit.

When on a mall shopping trip with Earn, Tracy casually mentions that he’s going to simply walk out with new shoes without paying because he knows the store has a “no-chase policy” (which is a thing – I worked retail in high school and college). He makes good on it…because apparently security cameras aren’t a factor in Atlanta. 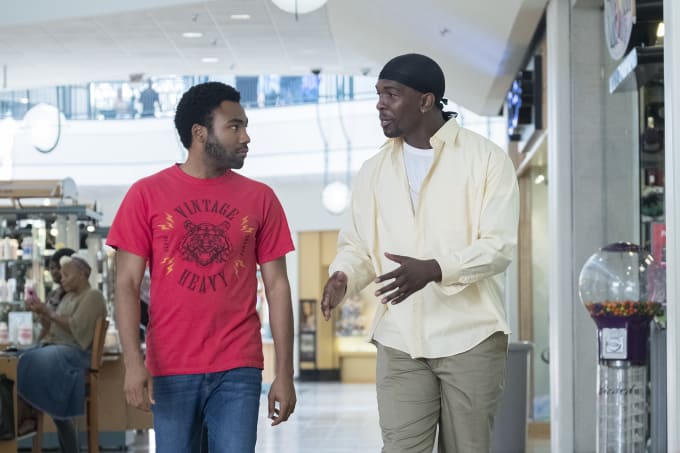 In a callback to a Season One episode, “The Streisand Effect,” in which Earn relies on Darius (LaKeith Stanfield) to flip his money through buying a dog to breed, Earn finally gets his dough back and then some – $4,000 in cash. Tracy offers to double them in gift cards, which provokes an “eee, don’t” reaction. We know that Darius is smart and reliable, but we don’t know Tracy yet.

Sure enough, Earn is shopping with the dirty gift card when he gets texts from Tracy saying the card will be turned off and that the authorities will likely track him down before long. Earn apparently purchases a lot of shit very quickly and heads to the parking lot holding his loot, only to discover that Tracy booked with the car with no advance notice. Not only is Tracy trifling, but Earn likely lost some of that $4,000 messing around with him.

The episode is titled “Sportin’ Waves” as a reference to Tracy’s omnipresent du-rag; he’s apparently the “prince of tides” under the rag, with the most luscious of waves. Darius unsuccessfully tries to take a look, but only the viewer gets to see them when he literally takes the rag off as he’s called in for an interview at a marketing firm that he has no business at anyway.

When his interviewer, a white guy, informs Tracy that he is not quite qualified for the gig, Tracy closes out the episode by storming out of the office yelling, “[Blank] y’all, y’all racist as hell up in here!” But his waves, though…? So pretty (and hilariously exaggerated) that you can surf on them.

In that scene, Tracy is all of us.