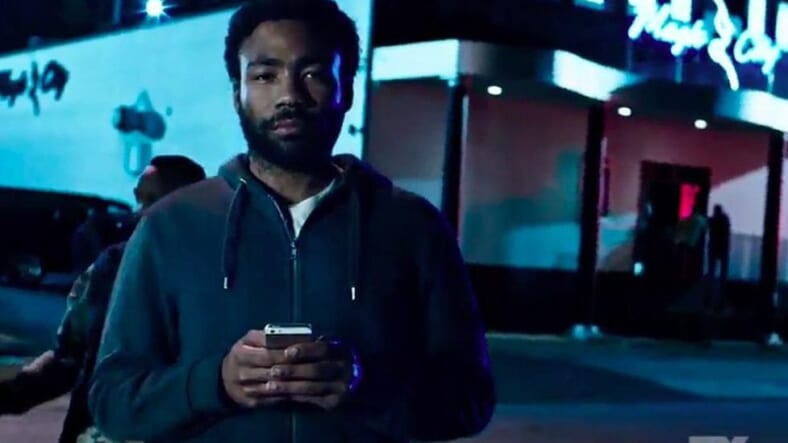 LaKeith Stanfield’s breakout character in Atlanta comes off like one of those dudes you’d do your best to get away from once he starts talking. But Darius is actually the most sagacious character on the show. He’s filled to the brim with knowledge you never thought you needed. So, when he tells you there’s a “Florida Man” that murders unarmed black teens and beats flamingos to death, expect that he’ll be proven correct at some point.

Anyway, we’ve waited 485 days for the premiere of Atlanta’s second season (marketed officially as “Robbin’ Season,” which Darius briefly explains in this episode), but we aren’t immediately reintroduced to our favorite characters.

Instead, the season kicks off with a 5-minute sequence in which two young slackers attempt to jack a fast food joint  at gunpoint. They want the dope the employees sell to customers who request a “number 17.” Since it happens in broad daylight during business hours, shit expectedly goes pear-shaped.

Confusing start? Sure. But that’s the charm of Atlanta: give the show time, and it’ll make sense – its callbacks happen when you least expect them.

Following the intro sequence, we pick up where we left Earn (Donald Glover) in the season finale – asleep in his storage unit. A staff member of the facility informs Earn that they know he’s living there and that he’s being “evicted” today, while also robbing him for some of his property. We’re reminded that Earn is destined to continue his role as a whipping boy, at least for a while.

Darius answers the door when Earn visits the home of Al, a.k.a. “Paper Boi” (Brian Tyree Henry) as he did in the series premiere; unlike in that episode, Earn feels tension between Al and Darius that remains unresolved. The season’s first deep chuckle comes from Al’s response to Earn sticking his foot in his mouth when Al’s lady friend stops by.

The episode’s main plot jumps off when, at the behest of Al, Earn and Darius head to the house of Earn’s uncle Willie, played by Katt Williams. Willie’s girlfriend apparently claimed that he kidnapped her and called the police. Katt does that scene-chewing thing that Katt is great at, delivering his best and funniest television appearance since A Pimp Named Slickback in The Boondocks.

Willie actually does have his lady locked in a room, and he kicks into comedic overdrive when cops arrive and start issuing threats, only for Willie to hilariously relay to them what he ain’t gon’ do.
In the current zeitgeist – hell even in the world of Atlanta – Black men mouthing off at cops evokes a “will-he-get-killed?” sort of tension, which is somehow tempered when Willie threatens to let loose the alligator he has locked in a room.

Laugh to Keep From Crying

It’s one of those laugh-to-keep-from-crying sequences that Atlanta does so masterfully – as with many of the incidences in the show, the domestic dispute shouldn’t be funny. But if ever you’ve witnessed a hood-ass couple go for broke while beefing, you’ll likely get a laugh or three in this scene. Willie is a sad loser for whom life didn’t turn out so well, and he attempts to pass down words of caution and wisdom to his nephew – along with a gold-plated gun.

But before you get a chance to lament Willie’s circumstances and the fact that he’s about to get arrested, “Alligator Man” makes good on his nickname by letting loose a whole-ass alligator on his front lawn as a diversion, leaving the police and the neighborhood kids awestruck by the animal (to the tune of “Hey! Love” by The Delfonics) while Willie runs up the street faster than I figured Katt Williams could run in real life.

At the end of the episode, we meet Tracy (Khris Davis), Al’s boy who just got out of the prison and is apparently staying at the house. We just get a piece of Tracy here, but he’s going to factor in significantly in next week’s episode.

As was the case with nearly every episode from Atlanta’s first season, we’re left craving much more when the credits start rolling. Looks like “Robbin’ Season” is gonna be a good one. Welcome back.