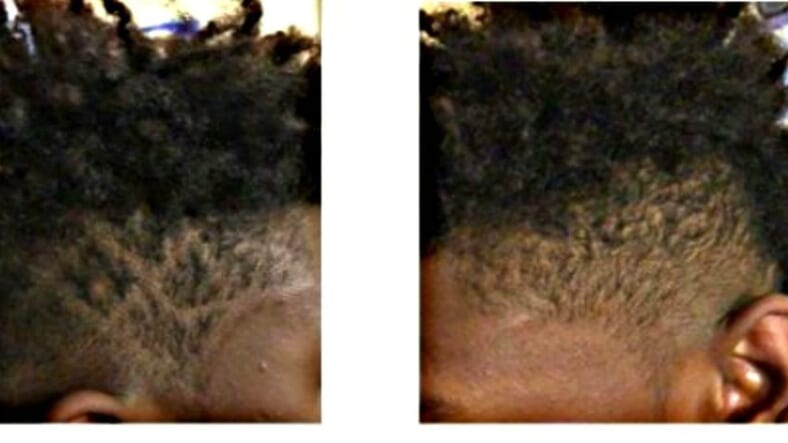 Erika Paggett says her son was kicked out of class for the lines in his hair. (ACLU)

A mom in California said her son is being targeted by a teacher who put him out of class after complaining that the lines in his haircut caused a distraction.

According to Erika Paggett, her 14-year-old son was singled out by a teacher at Tenaya Middle School in Fresno, California because of his haircut. The African American student was sent to the principal’s office, said Paggett, and was told by the school’s vice principal that he needed to get his hair “fixed.”

She wrote about her experience on the ACLU blog.

Paggett said she disagreed with the school but agreed to take him back to the barbershop to get his lines faded in.

However, she says she was unable to secure an appointment over the weekend.

When her son returned to school the next week without the fix, it presented more of an issue at school. Paggett said her son explained the circumstances to administrators – that it’s not easy to walk into a busy barbershop on a Saturday and get a haircut without an appointment and the shop was closed on Sunday. Unmoved by the explanation the vice principal put the student in isolation anyway.

“He was pulled from class and put in a room with another student and a teacher he wasn’t familiar with.” Paggett explained. “He was unable to have lunch with his classmates and was given packets of work to complete. Instead of following up with me, Tenaya Middle School administrators felt my son needed to be separated from other students until the so-called “distraction” was eliminated.”

Paggett said the school’s lack of cultural sensitivity it’s very concerning to her and her son.

“My son was confused because he was being treated as if he were in trouble, saddened because he had no knowledge his hairstyle would violate the dress code, and upset because he would be missing class until he was able to get it fixed.”

Then Erika Paggett said the principal followed up by telling her that she could have taken her son to Supercuts, a mainstream establishment that doesn’t specialize in African American haircare.

“Black people don’t have the luxury of walking into a random hair salon,” she said. “Employees of mainstream hair salons are not trained to accommodate black people’s hair. Her suggestion shows a total lack of cultural competence. Troubling, but not surprising.”

Erika Paggett believes that black students should not be punished because of what they look like and because teachers and administrators are unfamiliar with black people’s hair. Hair styles, she said, should not be considered distracting or “unusual” simply because other people are uncomfortable with them.

Paggett has now enlisted the help of the ACLU to defend her son’s rights and remedy the issue with the school.

An ACLU attorney is now working on the case and Erika Paggett says she hopes the district will do the right thing.

But it might be a little too late to ease her son’s concerns.

“I was able to erase the lines cut into my son’s hair, but not the emotional trauma he suffered,” she said.

The school did not respond to a request for comment.