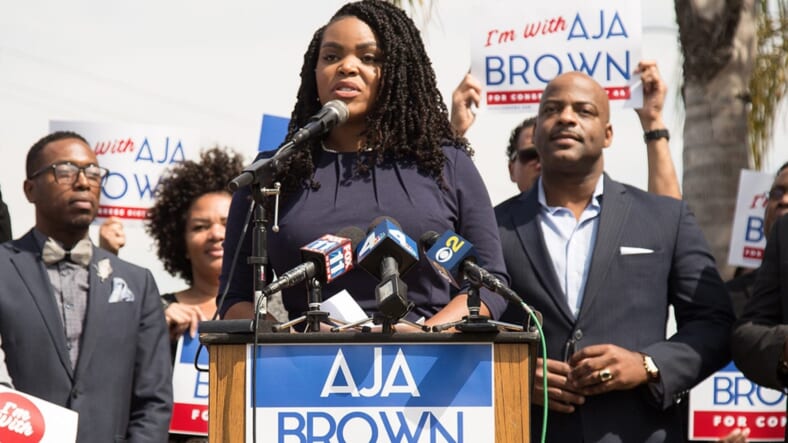 “The people of the 44th District deserve to be represented by someone who lives, serves and exhibits genuine love for our community, families and children,” Aja Brown wrote in a statement posted on her campaign website. “I am running for Congress to be the voice and vote for the people who are striving everyday to feed and raise their families. This campaign is about real people coming together for real progress in our communities.”

When asked by TMZ’s if Stacey Dash’s candidacy motivated her to run a competing campaign, Brown made it clear she’s focused on continuing to serve the community.

“To be clear, my decision to enter this race was not predicated on one person, but on the 700,000 residents of the 44th District,” she said.

Last month Stacey Dash officially filed the paperwork to run for Congress in California and many were surprised.

The Clueless star announced she was running under the slogan “Dash to DC” for the seat currently occupied by Rep. Nanette Barragán. California’s 44th Congressional District has been a Democratic district since 2012 and includes North Long Beach and Compton, according to The Hill.

Dash seemed to think that the political run was a good idea, even taking the question of her own candidacy to Twitter to see what the people thought.

“A number of people online and off have suggested I run for political office,” she wrote. “I wanted to see what my online community thinks of this idea as I mull the possibilities. Thoughts?”

But some might be rethinking a Dash candidacy after her recent MSNBC appearance.

During thursday’s interview with MSNBC’s Ari Melber, Stacey Dash sparked headlines because she blurted out that she was a “‘Clueless’ person” in response to a question from Melber about movies, but the real story is her comments about Nazis and Charlottesville.

Melber asked Stacey Dash, who is running for Congress out of California’s 44th District, if she agreed with Donald Trump’s contention that there were “good people on both sides” at the Charlottesville neo-Nazi rally that ended with counter-protestor Heather Heyer being fatally run down by a neo-Nazi driver.

“I think he’s absolutely right,” Stacey Dash responded, in reference to Trump’s remarks about the Nazis. “There were two extreme sides. And here’s what it boils down to: Our right. They had a right to assemble. Both sides had a right, but they were both extremes.”

Someone should probably remind Dash that only one side killed a member of the other side.

Considering the fact that Stacey Dash is running against Aja Brown in a district that voted overwhelmingly for Hillary Clinton during the 2016 election, this is going to be a hard, if not impossible, battle for the actress-turned-politico.

The district consists largely of African-American voters with a recent influx of Latin-x residents.

Aja Brown outlined her campaign objectives at a press conference in Compton, “My vision for a greater 44th is anchored in delivering real results, through building coalitions that unify, partnering with our cities to bring forth new investment, new opportunities and focusing on collective progress that we can see and touch,”

The primary elections are on June 5 and the top two candidates will move on to the general election on Nov. 6