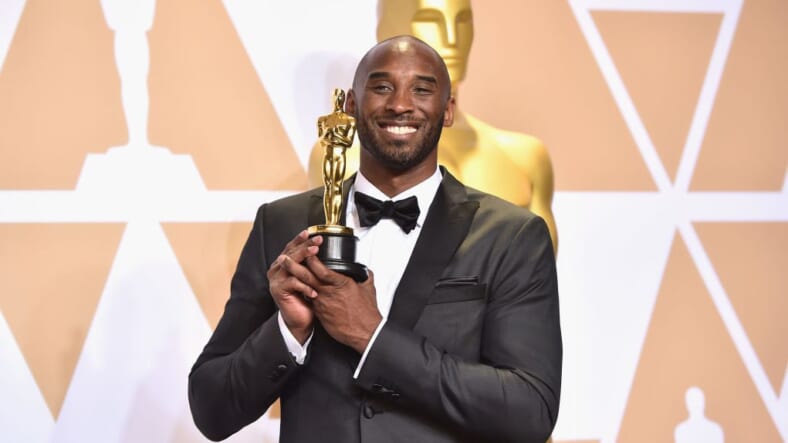 An online petition to take an Oscar award away from Kobe Bryant is gaining momentum on social media.

More than 16,000 people have reportedly signed an online petition to revoke Bryant’s Oscar because the NBA star was accused of sexual assault in 2003.

“The Oscars almost avoided nominating sexual predators for awards,” the petition reads. “Woody Allen and James Franco didn’t get anything. But Kobe Bryant, who was charged with a horrific sexual assault, was nominated.”

The former Los Angeles Laker won an Oscar for Best Animated Short Film at Sunday’s Academy Awards for Dear Basketball. The short film is based off Kobe Bryant’s poignant retirement letter published in the Players Tribune in 2015. The unexpected win shocked Bryant and he thanked his daughters in Italian while also throwing a little political shade saying:

“I don’t know if it’s possible, as basketball players we’re really supposed to shut up and dribble,” Bryant said. “I’m glad we do a little bit more than that. Thank you, Academy, for this amazing honor. Thank you, John Williams for such a wonderful piece of music. Thank you, Verizon for believing in the film. Thank you, Molly Carter. Without you we wouldn’t be here and to my wife Vanessa and to our daughters Natalia, Gianna and Bianka … you are my inspiration.”

Bryant’s comment was directed at Fox News’ Laura Ingraham, who recently told LeBron James to “Shut up and dribble,” in reaction to the Cleveland Cavaliers’ player voicing his political opinions.

The petitioners are hoping that with enough signatures Academy will reconsider Kobe Bryant’s win.

Kobe Bryant settled a lawsuit out of court after a female hotel employee in Colorado accused the NBA player of sexual assault. Bryant denied the encounter at first and then recanted saying that he and the victim had consensual sex. The young woman later dropped the charges and filed a civil lawsuit instead, which was settled.

LeBron James and Shaquille O’Neal saluted Bryant when he won his Oscar saying:

Shaquille O’Neal also added his voice to the conversation, also acknowledging his longtime teammate (and rival) on Twitter: “Congrats to KOBE first Oscar that’s big bro #dearbasketball. Proud of you, Big honor for you and your family. I’m jealous lol,” he joked.

But it’s left to be seen if the athletes will speak out against the petition against their peer.