Why does this woman still have a job? 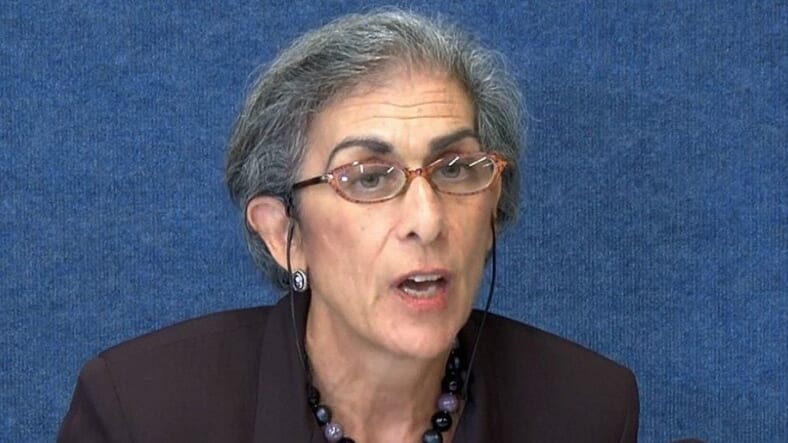 University of Pennsylvania law school professor Amy Wax still has her job, despite saying during a video-taped October 2017 interview that she doesn’t think she has ever “seen a Black student graduate in the top quarter of the class, and rarely, rarely, in the top half.”

Video from the interview surfaced earlier this month and immediately drew criticism from faculty and students. Wax, who is a tenured professor, will continue to teach second and third-year electives, but will no longer teach first-year students.

The interview was between Wax and Brown University professor Glenn Loury for a talk about affirmative action called “The Downside to Social Uplift.”

“Here’s a very inconvenient fact, Glenn: I don’t think I’ve ever seen a Black student graduate in the top quarter of the class, and rarely, rarely, in the top half. I can think of one or two students who scored in the top half of my required first-year course. What are we supposed to do about that,” Wax says in the interview.

She goes on to affirm that there is a “diversity mandate” for the school’s Law Review.

Penn Law’s dean, Theodore Ruger is back peddling from the statements Wax made in the video.

According to the Daily Pennsylvanian, Ruger responded to the Wax controversy via e-mail.

“As a scholar she is free to advocate her views, no matter how dramatically those views diverge from our institutional ethos and our considered practices,” wrote Ruger. “As a teacher, however, she is not free to transgress the policy that student grades are confidential, or to use her access to those Penn Law students who are required to be in her class to further her scholarly ends without students’ permission.”

Ruger went on to specifically respond to the claims about Black student achievement: “Black students have graduated in the top of the class at Penn Law. And contrary to any suggestion otherwise, Black students at Penn Law are extremely successful, both inside and outside the classroom, in the job market, and in their careers.”

He also flatly denied that there were any quotas involved with the Law Review, noting that the editors are selected in a competitive process.

Penn’s Black Law Student Association has been vocal on the Wax issue and posted the clip featuring Wax’ incindieary comments to YouTube earlier this month. The organization’s president, Nick Hall told Philadelphia Magazine that he was offended by the professor’s statements.

“Amy Wax insinuated demonstrably false and deeply offensive claims about Black law students and alumni,” said Hall. “In the end, this story will not be about Amy Wax. She doesn’t need any more of a platform. It will be about the resilience of Black Penn Law students to rise against bigotry.”

A petition addressed to Dean Ruger began circulating earlier this week. The petition called for Ruger to make a strong statement condemning Wax’s words and to take action. ”

“If Penn Law is finally taking the appropriate measures to prevent students from having to endure such racial hostility and intimidation, now is the time to articulate those action steps,” the petition read.

No Stranger to Controversy

Amy Wax, who specializes in social welfare law and policy, is not new to controversy. In commentary she co-wrote with another academic last summer for Philly.com, Wax called for the return of “bourgeois” culture.”

She said that “the single-parent, antisocial habits, prevalent among some working-class whites; the anti-“acting white” rap culture of inner-city Blacks; and the anti-assimilation ideas gaining ground among some Hispanic immigrants are all incompatible with an advanced, free market economy and destructive to America as a whole.”

Wax doubled down on her sentiment with comments to the Daily Pennsylvanian during that same summer. She claimed “everyone wants to go to countries ruled by white Europeans” because their cultural norms were superior. I don’t shrink from the word ‘superior.'”

As with this most recent controversy, Wax’s comments at the time were roundly condemned her faculty colleagues and her students.

Wax has been a professor at Penn Law since 2001.