Blue Ivy steals the show at the Wearable Arts Gala by bidding on a $19,000 piece of art 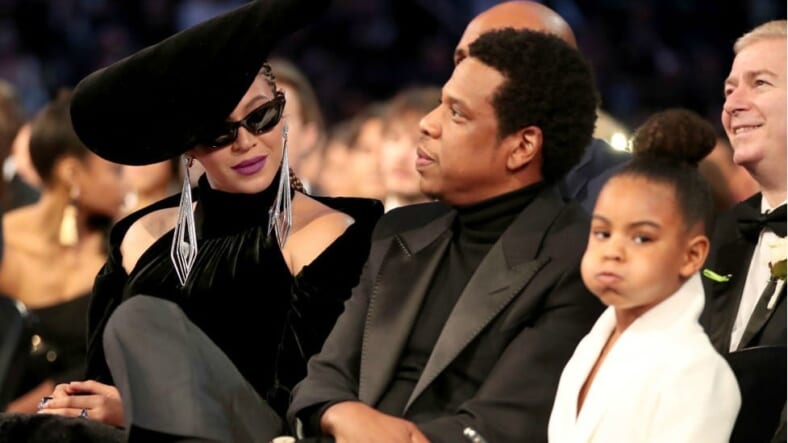 It’s clear that the Carters already have their hands full with their eldest daughter Blue Ivy, and Twitter can’t get enough.

Saturday night Beyoncé and Blue attended the 2nd Annual Wearable Art Gala in Los Angeles, in matching gold dresses. In a nod to the biggest movie of the year, the evening’s theme was “From WACO to Wakanda” with everyone’s outfits reflecting the ever growing influence Black Panther.

The annual event was a family affair hosted by mom, Tina Knowles Lawson, and step-dad, Richard Lawson, with Beyoncé being honored for her humanitarian work at the Gala, alongside her mother in-law, Gloria Carter.

As usual, Blue effortlessly stole the show. This time, when she tried to jump in on a pricey art auction hosted by Star Jones.

In a viral clip she can be seen raising her paddle to bid  on a piece of art while her father playfully tries to wrangle it away from her.

“Her mother and father have been talking about how you gather art and that is a big deal for African Americans. Listen, you know Ms. Tina told me all of this. Why you think I’m up here talking about it?”

Of course once Twitter heard about this, they were quick to react.

Check out some of our favorite responses below.

READ MORE: Beyoncé and Blue Ivy spotted shopping at Target, and everybody loses it

Blue Ivy out her bidding $19K like it’s nothing. Meanwhile I’m over here flexing with these 30 day free trials and cancelling the day before the trials are up so my card won’t get charged.

Oh, Blue Ivy got me all happy inside. Such a cutie she out doing her parents @Beyonce #Beyonce #JayZ right now #BlueIvy has my respect. She too cute to be ignored now. This little girl bidded 19K &Jay'z face was like: #nerdyburdrecaps pic.twitter.com/qGUCNg5aEz

.@Beyonce accepts a humanitarian award from her mom at the Wearable Art Gala, with Jay-Z and Blue Ivy in the audience ? @THR pic.twitter.com/aYJBFIGduK