Some are looking at her as the next Serena Williams. 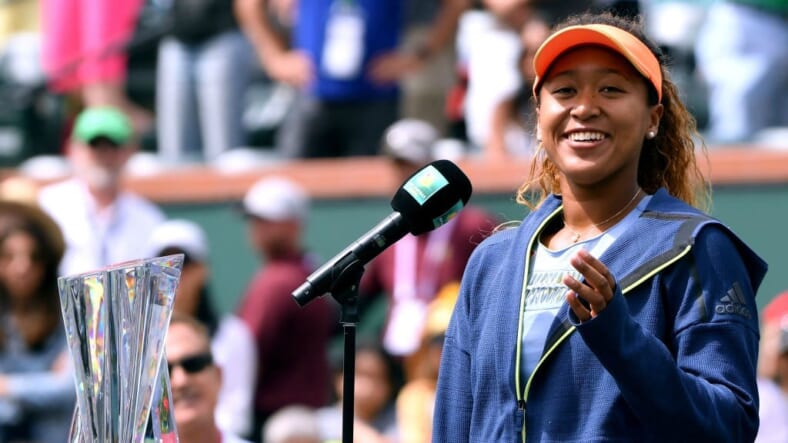 INDIAN WELLS, CA – MARCH 18: Naomi Osaka of Japan gives a speech with the trophy after her victory in the WTA final over Daria Kasatkina of Russia with her coach Sascha Bajin during the BNP Paribas Open at the Indian Wells Tennis Garden on March 18, 2018 in Indian Wells, California. (Photo by Harry How/Getty Images)

Naomi Osaka, the 20-year-old Haitian-American-Japanese tennis pro is just getting started but is knocking down her competition on her way to the top.

The young tennis player just became the youngest champion at Indian Wells since Ana Ivanovic in 2008, according to the BBC. Osaka, representing Japan unseeded, beat Russia’s Daria Kasatkina, the 20th seed. With 6-3 6-2, she claimed her victory in one hour and 10 minutes.

Similarly to a young Serena Williams, it was the first time two players under age 21 fought for the title at the historic venue. In 2001, Williams was 20-year-old and her losing opponent Kim Clijsters, 18, set the trend.

The BBC notes that Osaka, Williams, and Clijsters are the only unseeded opponents in history to win the women’s title at Indian Wells.

The win is the first at any level of tennis for Osaka. Her career-high ranking will

The win is the first at any level of tennis for Osaka. Her career-high ranking will reportedly move up from 44 to 22 after the defeat.

Last year, Osaka made headlines after she ousted the defending champion Angelique Kerber in her first round in 12 years.

Indian Wells is seeing an amazing competitive year for its components, as Serena Williams made her stunning return to the courts there two weeks ago, following the birth of her daughter.

The BBC reports that she was given a standing ovation as she walked onto the court.The crowd was flooded with signs and shouts of encouragement. Not to mention, Serena is a Cali native, raised in Compton since the age of the 3, proof of the “Welcome back!” chants.

“I’m a little rusty but it doesn’t matter,” said Serena Williams. “It definitely wasn’t easy but it was good.”

“It’s been over a year, and a kid later, and I get to go home now to her, and I’m excited about that,” she told the Los Angeles Times.

Hubby Alexis Ohanian, Reddit co-founder, was also present and courtside with Serena’s other family and friends cheering her on.

READ MORE: Black Trump supporter goes off on CNN: “You have no respect for Mrs. Trump”