We learn more about Van and Earn's situationship. 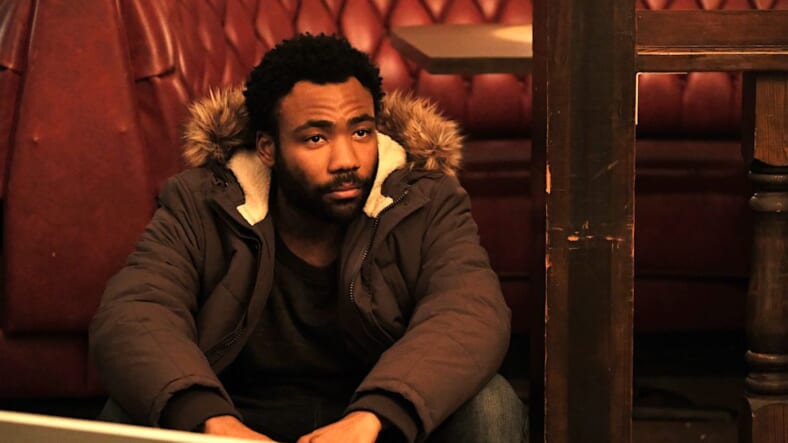 There’s a reason folks in the comments section of the YouTube promo for “Helen” called this the “Get Out episode.”

After kicking off the episode with a spit-taker – Earn (Donald Glover) going down on Van (Zazie Beetz) in the show’s most explicit sex scene to date – we hop to the “couple” driving away from the city to Helen, Ga., a little village northeast of Atlanta in the aptly-named, White County. Van apparently grew up in or around Helen, and regularly participated in the city’s Oktoberfest celebration as a kid.

The parallels between Jordan Peele’s Oscar-winning blockbuster are there, ranging from conversations about whether Earn will enjoy this decidedly non-Black event to the boar in the middle of the country road that they almost hit.
Their discussions about oral sex “tongue confidence” while high and whether Black women can be considered brunettes (which I guess I never thought about), remind you that you are, indeed, watching Atlanta.

Helen looks like one of those “idyllic” towns where the white folks are super pleasant to Black folks to their face but eyeball-bang them with mistrust. Two white ladies do just that from inside an antique shop as Van and Earn walk up the street. (My white stepmother dragged us to Michigan equivalent towns, so I know them well.) A young white lady runs up to Earn and grabs his face out of familiarity, only to realize that she got the wrong person…since we all look the same to the denizens of Helen.

Earn represents every Black person who has to quickly adapt to the goings-on in a white space: He’s dragged into a game involving tennis balls that he’s expected to learn on the fly; when he gets love from everyone for doing some seemingly stupid shit in this game, he’s as confused as we all are watching.

But Van is irritated at Earn’s inability to acclimate. She expresses that he should learn a completely-useless-in-Atlanta language like German, and is bothered by Earn’s impatience as she has a conversation in German with a pretty white boy and he understands not one word. (Beetz is a real-life German-born woman with a German father and Black mother and who grew up speaking both English and German.)

Outside of a somewhat out-of-place encounter between Van and her childhood friend regarding their differing perspectives on Blackness (she’s with a white guy who says shit like “I’m wearing lederhosen, dog” and “I got a spare mask in the whip”), the whole episode is centered around Earn and Van’s relationship in a way that the show had yet to explore. it also serves as a cautionary tale regarding relationship expectations that are often not aligned.

Earn is clearly not into Oktoberfest while Van has somewhat unrealistic expectations that he just get into it, and Earn is brought to task for some of the selfish behavior we’ve seen him engage in since season 1. It seems that which Earn appreciates most about Van, outside of the fact that she’s his baby’s mama, is that she’s eye candy who’ll give him some ass on a regular basis.

They finally have their Come to Jesus moment when they lay their cards out for each other – she wants a committed relationship in which she’s not objectified and he doesn’t quite know what he wants, but he knows that the current arrangement of getting his cake and eating it too is working out for him.

Van proposes a Love and Basketball-esque “play for your heart” second game of ping-pong. if Van wins, Earn only gets access to her to see their child and give her money. She damages his ego earlier in the episode by beating him, so it would seem Van knows the second game is an easy win.

READ MORE: What are Beyoncé and Jay-Z doing in Jamaica?

We don’t see the end of the game, but the disconnectedness they have on the drive back to Atlanta – and their exchange on her doorstep at the episode’s end – seem to indicate that Van won and that their relationship will be one of strictly co-parenting from now on. (It’s strange to me that we haven’t yet seen the kid at all by episode 4).

“Helen” is definitely my least favorite and the least ha-ha funny episode so far this season. (No Al or Darius at all!) But it navigates real relationships waters…some that I’ve almost drowned in myself. The fact that it was actually difficult for me to watch some of the scenes a second time is a testament to how well the writers nailed it.