This is the same man who threw his own wife under the bus, so this is not shocking. 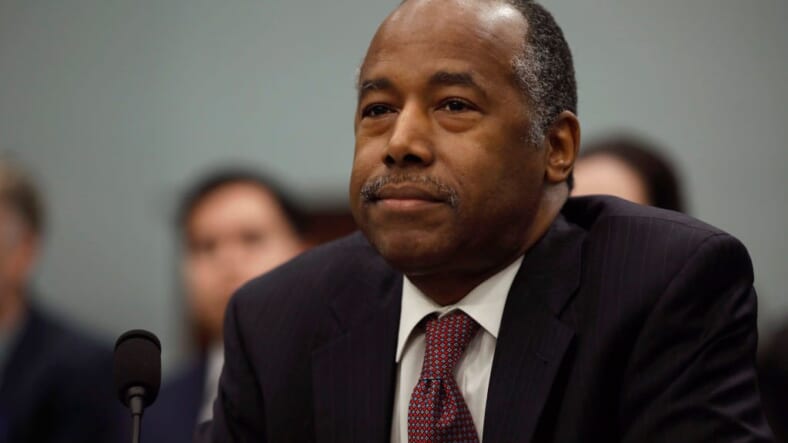 Housing and Urban Development Secretary Ben Carson is on a roll with blaming everyone but himself for his actions. On Tuesday, at the same House subcommittee hearing where he threw his wife under the bus about that ridiculous $31,000 dining set, he also took the time to explain why he axed six key HUD anti-discrimination resources designed specifically to eliminate and protect LGBTQ persons.

At the time, Carson referred to the removal as a response to women “who were not comfortable” living in the same quarters as “somebody who had a very different anatomy.” Essentially, he reiterated the same vitriolic and idiotic assumptions that upheld North Carolina’s controversial bathroom law that illegitimately characterized transgender people as predators.

At the House committee hearing, he further explained his position.

Jezebel points out that an official letter was sent to Carson and his staff in July, 2017, signed by 31 United States Senators.

In the letter, they noted that the HUD administration had withdrawn “a proposed policy… that required shelters to hang a poster alerting residents of their anti-discrimination laws,” and “a proposed survey designed to evaluate the impact of the LGBTQ Youth Homelessness Preventative Initiative.”

-#BlackonBlue: 7 things to know about the fatal police shooting of Stephon Clark-

Additionally, they stated that they were concerned of the website removal of “a guide instructing HUD grantees on how to ensure equal access to transgender people”, as well as “a self-abasement tool that allows shelters to evaluate how well they are doing in compliance with anti-discrimination regulations and best practices.”

The Trump administration has a well-documented history of doing away with anti-discrimination policies. Since Trump has been in office, he has taken a number of actions that chip away at trans rights, including banning trans people from openly serving in the military.

-#BlackonBlue: 6 things to know about the fatal police shooting of Decynthia Clements-