Eric Holder wins lawsuit, shows GOP why he’s not to be underestimated

Former Attorney General of the United States delivered a crushing legal defeat to failed presidential candidate, Wisconsin's GOP Governor Rick Scott that forces special elections to be held within the next 11 weeks. 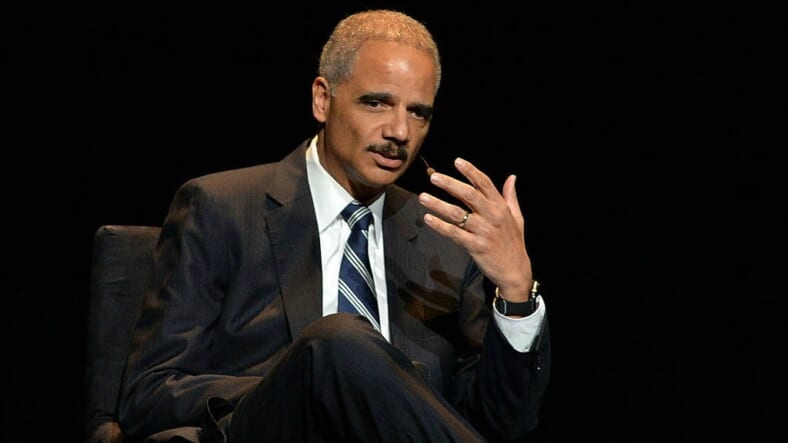 It seems Wisconsin’s Republican Governor Scott Walker believes that he can abide by his own interpretation of the law when it comes appointing officials.

Well, Eric Holder is not having it and sued Governor Walker for the illegal move.

According to Salon, a Dane County judge issued a writ on Thursday compelling the Wisconsin governor (and failed presidential candidate) to hold special elections for two legislative seats that became vacant on December 29th, when Walker appointed the two elected Republican officeholders to join his administration. According to state law, “Walker should have called for a special election to fill “any vacancy in the office of state senator or representative to the Assembly occurring before the 2nd Tuesday in May in the year in which a regular election is held to fill that seat  as promptly as possible by special election.”

Walker decided his way was the right way

Democrats noted that Walker was eager to call for a January special election in a primarily red district for a seat held by Republicans since 2000 that was also vacated in late 2017. Many believe that at the time, the conservative politician assumed a certain victory.

However, after Senator Patty Schachtner, who is a Democrat, won the January special election and another Democrat won 43 percent of the vote in a primarily Republican State Assembly district during that same special election; Walker was thrown for a loop.

According to Salon, Walker called the January results a “wake-up call” and since refuses to hold the remaining special elections for the Legislature.

Walker argued, however, that his refusal was about saving the state money, not about suppressing voter representation, noting that the Legislature is set to adjourn in May.

The issue with that logic is that the winners of the two races— if held in November, when Walker is up for re-election— would not be seated until January of 2019, meaning voters in those districts will go over a year without a sitting representative.

According to Salon, Jennifer Meyer, one of the nearly 175,000 people who would be without representation in the Legislature until 2019 under Walker’s decision, stated, “It’s one thing it’s vacant, it’s another thing if they’re not going to fill it. We have nobody representing the interests of our district in the state Senate right now and that upsets me.”

Walker continued to defend his actions citing that the statutes don’t technically apply because the vacancies didn’t occur until the end of 2017.

On Thursday, March 22, Judge Josann Reynolds, who just so happened to be appointed by Walker in 2014, ruled against Walker’s “new way of the law”.

The judge ordered the governor to schedule special elections within the next 11 weeks. The judge also ordered that the announcement of the exact date be made by March 29.

According to Salon, It was the former U.S. attorney general under former president Barack Obama who brought the lawsuit, on behalf of Wisconsin voters— five voters living in the vacant Assembly district, and three in the vacant state Senate district— against Walker.

Holder stated, “This is an important victory for the impacted citizens of Wisconsin who have gone without representation because of Governor Walker’s refusal to call special elections.”

Holder, whose group The National Democratic Redistricting Committee launched last year and is committed to using the courts to compel Republican leaders to hold fair and timely elections, said on Thursday “Governor Walker’s actions have undermined that right and it should never have taken legal action to force him to do his job.”

Walker has not said whether he will immediately call special elections, as ordered by the judge. His spokesperson Amy Hasenberg told the Associated Press that the governor was discussing next steps with Department of Justice attorneys.