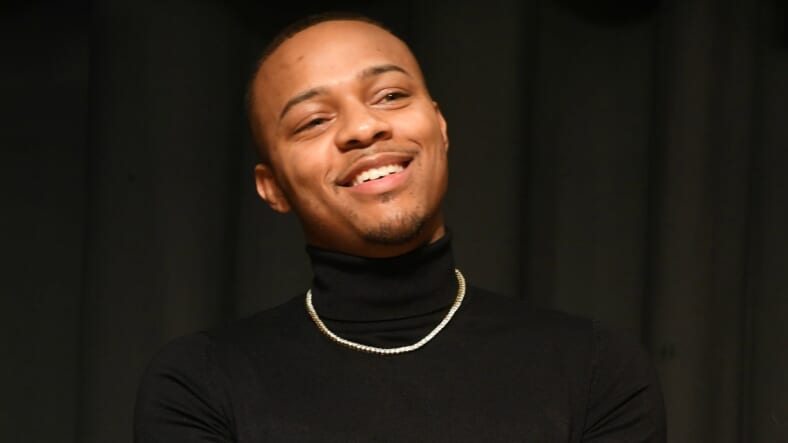 Shad Moss a.k.a. Bow Wow, says he's laughing all the way to the bank with his latest deals. (Getty Images)

Whether you call him Bow Wow or Shad Moss the rapper, actor and businessman wants you to know he plans to take over 2018.

“My job this year is to dish out more music and more content than any other artist in the game,” said Bow Wow, in an interview with theGrioLive co hosts Natasha Alford and Gerren Gaynor.

The entertainer hit the scene at the tender age of 13 with his first album, Beware of Dog. The album was certified double platinum and became the first of several platinum selling albums by the rapper. He has also starred in several hit movies and TV shows including, Madea’s Big Happy Family, Lottery Ticket, and CSI: Cyber. Of course, everyone remembers he was affectionately called Mr. 106 and Park. Just like other stars who rose to prominence in the late 90’s and early 2000’s, he has to compete with the new school and prove he has staying power.

“I just let one hustle open up so many other avenues for me and I just take it. I really feel I can’t just be categorized as a rapper, actor. You gotta be categorized me as an entertainer. There is really nothing that I feel I can’t do,” he continued.

Moss has been in the entertainment industry for more than two decades and unlike some child stars he managed to escape the child star “curse.” He currently stars in and executive produces Growing Up Hip Hop: Atlanta.

“It is important to own anything with your name on it. You have to have some type of clout on your resume. So for me, I just wanted to get in early with it and this opens up the doors for other things (movies, television). It was time. I had to boss up. It was time for me to own something,” said Moss.

The show is a proven hit for WeTv. It is the network’s current number one show on Thursday nights.

“I think the reason why the show is number one is millennials. Everybody is young. Their parents are iconic figures in the game and outside their parents they have their own lane.”

The entertainer points out that he isn’t focused on what other artists are doing, but admitted that at times there is pressure to maintain the level of success he achieved as a child. Last year he was scrutinized in the media for posting a picture of a luxury car beside a private plane on an airport tarmac with the caption: “Travel Day NYC press run for Growing Up Hip Hop, Let’s Go.”

The posted alluded to him being at an airport in Georgia, but turned out to be false he was on a commercial flight. He was called out on social media for pretending and the incident gained so much attention a Bow Wow Challenge was created. The rapper turned lemons into lemonade and has teamed up with Mona Scott Young to create a show.

“I got a show off the Bow Wow Challenge, That is in motion,” said Moss.

He is also currently working on new music which he plans to release this year, and has signed on to star in Barbershop the play alongside Oscar winning actress Monique, Allen Payne, and Lisa Raye.

The show is back for a second season with more drama and big secrets every Thursday night 9/8 c.

“There is big decision making for everybody, for all of us,” said Bow Wow.