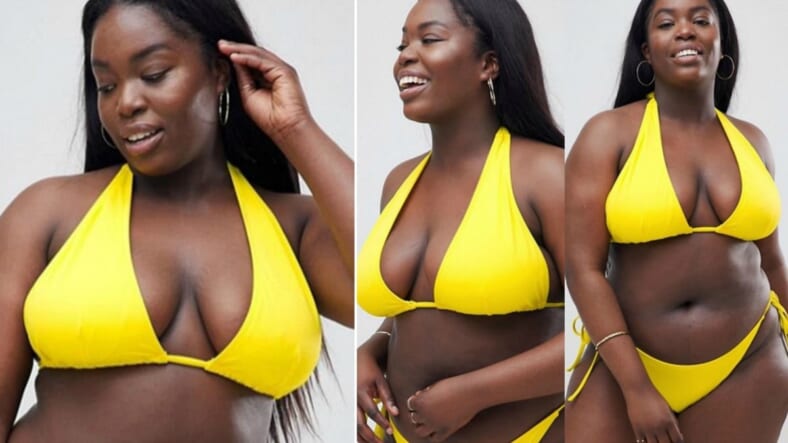 ASOS has come a long way from the days of putting the world slave on their tees which drew wide-spread criticism for the clothing company.

The online retailer is now being praised big time for celebrating curvy girls by featuring a plus-sized model in a yellow bikini on their website – and fans are feeling it, reports Complex.

The model, Vivian Eyo-Ephraim is getting lots of online love. The support is even shocking to her. She took to Instagram to thank fans.

“Thank you ALLLL so much for the messages, the likes, the comments, the retweets, everything!!! I’m truly appreciative, shocked, excited & cannot wait to represent more women & make everyone even more proud️ #CELEBRATEMYSIZE”

Fans took to Twitter to continue the stream of praises for the company’s inclusive curvy line.

ASOS’ new curvy line has come a long way since the swift criticism of their slave tees. The indie multiseller sister site, noticed a Wasted Heroes tee shirt with the word “SLAVE” printed on it. To make things worse, for some reason, ASOS had decided to use a black model for the shirt.

The outcry was swift and as instant as the internet can be, leading ASOS to quickly issue an apology and admit, “It really was extremely stupid of us.” The item was removed as well, ASOS confirmed.

Apparently, the shirt was meant to portray people being “slave to fashion,” according to Wasted Heroes.

“The T-shirt was referencing that we are slaves to fashion labels hence why it is titled ‘Slave to the label’ and no offense was intended with this design or listing,” the brand said to Tab, the student newspaper that was the first to report on the shirt and the controversy over the model.

ASOS, meanwhile, issued a statement after taking down the image. “Marketplace is a collection of independent sellers who must agree to our terms and conditions when they join,” ASOS told Mic. “Whenever we find product that violates our policies we remove it immediately. There is also a ‘report this item’ link under every product picture.”

OMFG HAVE YOU SEEN THIS @ASOS MODEL ????? https://t.co/91WkdWZfel #AL pic.twitter.com/EWehvyzFLk

LORD HAVE MERCY, I BEG, NEVER LET @ASOS GO INTO ADMINISTRATION, FOR THIS #Blackgirlmagic #plussize #diverse REPRESENTATION IS EVERYTHING ? ????? #StillCryin #asos (Brands, you better do better) pic.twitter.com/5un0pw33Qt

Melanin x Yellow ???
Here for the representation on the ASOS website ?? pic.twitter.com/P0s7FWYfP1