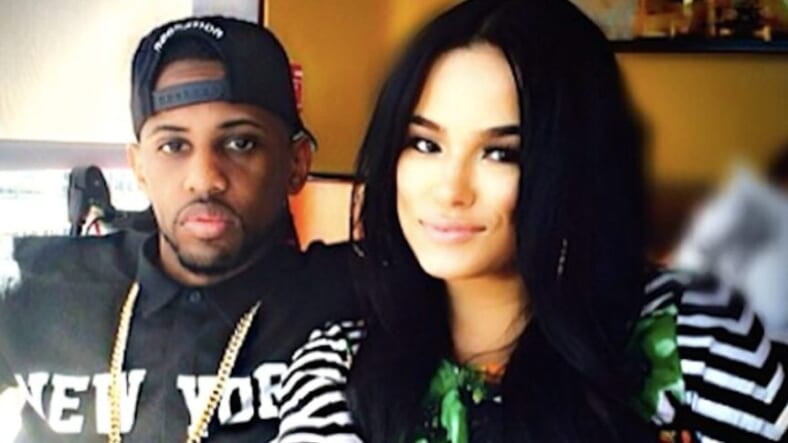 Video has surfaced that supports Emily B’s claim that her boyfriend Fabolous was in a rage, wielding a weapon and threatened her and her family before brutally beating her face and knocking two of her front teeth out.

TMZ obtained the video which shows Fabolous aggressively advancing toward Emily B with a weapon in hand as she screams and tries to run away. Her father can be heard, screaming at the rapper, saying “that’s my motherf***ing daughter” as the two exchange expletives and a man identified as the rapper’s bodyguard tries to handle Fabolous and guide him toward a black SUV.

READ MORE: Fabolous turns himself in after allegedly assaulting Love and Hip-Hop’s Emily B

The exchange takes place outside of Emily B’s and Fab’s home in Englewood NJ. A baby can be heard screaming in the background.

On Thursday Fabolous turned himself in after it was reported he allegedly hit his girlfriend, Emily Bustamante, but according to court documents obtained by NorthJersey.com, the rap star punched her in the face seven times, knocking out two front teeth.

The 40-year-old rapper, whose real name is John David Jackson, was officially charged with aggravated assault and making a terroristic threat. He was also given a court date. Additional information on the incident has not been made publicly available by authorities.

Fabolous and Bustamante, have had an on again and off again relationship over the years. The couple has two children together and Fab has come under fire from fans for years for not marrying the long-suffering Bustamante.

According to NorthJersey.com, Fabolous was mad when he found out through Instagram that Emily B was in Los Angeles while he was there on business March 7. Court documents state that Fabolous “became enraged” and threatened Emily B through several texts saying that he wanted to hit her in the head with a bat, but he “did not want to go out like that.” He also allegedly said he wanted to kill her.

READ MORE: A Tribe Called Quest debuts what they say is their last music video

Emily B said later to police that Fabolous punched her in the head seven times and in the face, “causing severe damage to her two front teeth,” according to the docs. She also reportedly lost those two front teeth in the brutal attack.

The docs also stated that Emily B had her dad and brothers come to her home to remove some guns before Fabolous got there. When he realized the guns were missing, he then threatened to put a bullet in her dad and brother, which resulted in the terroristic threat charge against the rapper.