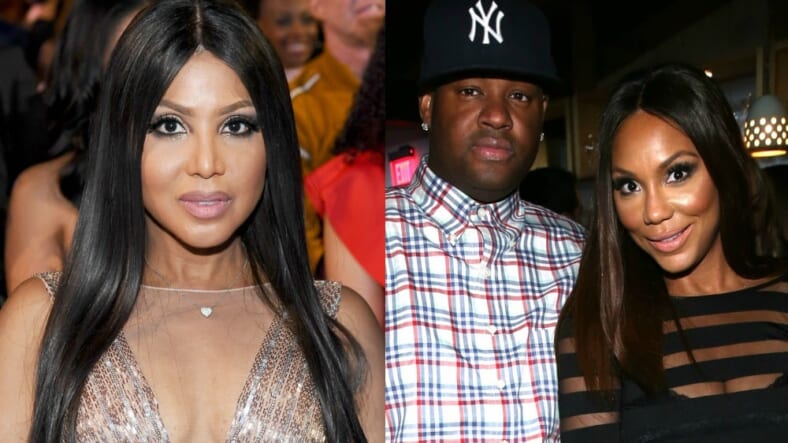 Toni Braxton has axed her sister Traci from her tour.

TMZ reports that Toni has sided with Tamar who is on the Sex & Cigarettes tour with her and dropped Traci from the schedule. Sources claim Tamar is upset with Traci and her other sisters for attacking her estranged husband Vince Herbert.

READ MORE: A Tribe Called Quest debuts what they say is their last music video

Toni hasn’t offered an official word why Traci’s no longer on the fans, but fans speculate the outspoken Tamar has been stirring the pot.

The youngest of the Braxtons allegedly blames her family for ganging up on Herbert during the new season of Braxton Family Values and is refusing to promote the show, TMZ reports.

That’s ironic considering Tamar has come out attacking Herbert herself, even claiming on Instagram that he got another woman pregnant at one point.

Despite their marital woes Tamar still maintains her sisters are unfairly framing Herbert as a villain on the show while making up fake storylines to really stick it to him.

Sources also told TMZ the ‘Love & War’ singer is on strike and not willing to promote the show until the producers cut the areas she feels are lies.

After all this Tamar still doesn’t plan to reconcile with Vince but wants to remain cordial since she shares a son with him.

Breaking Up is Hard to Do

Tamar Braxton publicly announced that she had filed for divorce nearly four months ago. And immediately there were rumors swirling in the streets of a secret love child, extramarital affairs, and domestic abuse, which her own mother helped fuel.

During a recent appearance on The View, Braxton discussed her marital status and the reason for her disappearance from Instagram.

READ MORE: Stacey Dash comes to her senses and withdraws from congressional race

Beginning by addressing rumors that all of the drama was concocted solely for reality television ratings, Braxton stated, “I absolutely have no reason to lie about my marriage or the things that [are] happening in my marriage for ratings. I think that’s disgusting and I would never sell my soul to the devil like that. It’s not that serious. Marriage is a serious thing for me and for my family.”

“I have a regular marriage and in regular marriages just like everyone else, things happen,” she clarified. “In my marriage, it was just to a point where I felt like divorce was the only option I had left.”

Vincent Herbert was also present during the interview—but as an audience member.

“Although we’re in extensive counseling and that is much needed and it always will be,” the star continued, “I think the bigger picture of everything is that we have a responsibility to my amazing 4-year-old son. Just to raise him in the most comfortable, amazing, loving and secure household that we can—that’s why we don’t live together.”

She made it clear that she definitely did file for divorce and was continuing with the proceedings.