Find out what else he has to say about the state of our country. 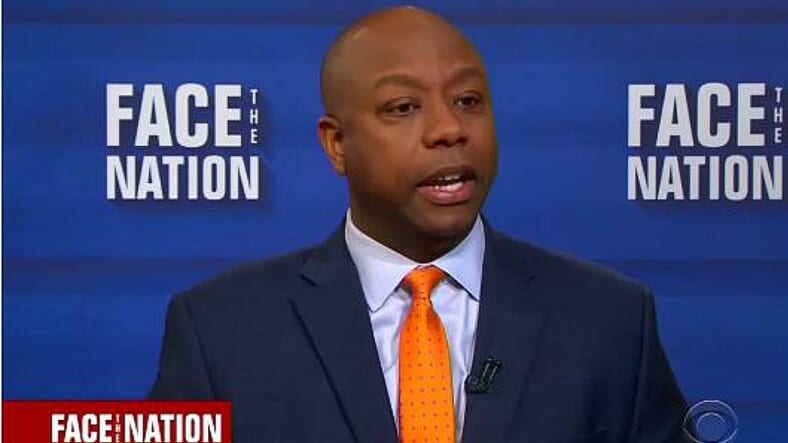 U.S. Sen. Tim Scott certainly isn’t the first Black Senator to sit in Congress, but right now, he’s the only one representing the Republican Party during one of the most polarizing and hostile political climates ever.

Scott, who has said he would not join fellow Black Senator Cory Scott, a New Jersey Democrat, on the decidedly Democratic Congressional Black Caucus, appeared on CBS’ Face the Nation Sunday to talk about our country’s issues with race, the proposed border wall and his new book on racial healing that he co-authored with U.S. Rep. Trey Gowdy, a fellow South Carolina Republican and friend.

In the past, Scott has said that he does not believe that President Trump is racist, but instead “racially intensive” to the issues that affect the Black community and other communities of color. During this interview, Scott stood by that claim. He also shared his thoughts on current topics from his perspective as a member of the Senate Armed Services Committee.

The book “Indivisible: Overcoming Our Differences, One Friendship at a Time,” is set to be released Tuesday by Tyndale Publishers.

Here are some highlights from Scott’s interview:

On who should pay for the border wall: “Our southern border is very porous. The truth is that more folks came through our southern border that did not come from Mexico, so it is certainly a national security issue. I think Homeland (Security), so far, is a place that we should find the resources for building the wall, not necessarily the DOD (Department of Defense). But I’ll see what comes … before my committee to make sure that we have enough information to make a decision.”

On the aftermath of the 2015 fatal church shooting of the Charleston nine: “The truth is that after the 2015 Mother Emanuel Church shooting, I found myself turning to a white guy in the aftermath. It became clear to me that there is a chance to bridge real gaps in this country.”

READ MORE: Why Tim Scott is not good for Black people

On President Trump’s response to Charlottesville: “I will say that when I went to the President after the Charlottesville incident, he asked me what could he do? We were not on the same page as it relates to the history of race in this nation. But we found a common position on legislative remedies that could help people in distressed communities.”

On the Justice Department under President Trump: “I can’t say whether or not the entire administration reflects his position. I will say that he has been very positive on legislative remedies. I think if you follow the facts what you’ll find is that unemployment rates within the African-American community at 6.9 percent haven’t been this low in almost two decades …The fact is that the policy position of the administration is moving this country in the right direction economically. We still have to work on the tone and the rhetoric.”